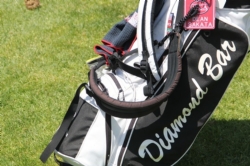 Diamond Bar didn’t expect the quest for a return trip to the CIF state girls golf final to be easy, but the Brahmas made their performance Thursday at the Southern Section Northern Team Divisional seem routine. Although Diamond Bar faced the challenges of Hacienda League rival Walnut and two-time Northern champion Notre Dame, the Brahmas responded in dominant fashion, relying on a 4-under 67 from Bethany Wu and Kaitleen Shee’s 69 to post a cumulative score of 5-over 360 at Soule Park Golf Club to capture the title.
“We expected to win, but that’s what we expected from ourselves. We know how good these teams are, but going against them just makes us play better,” Shee said. “We didn’t want to play against someone that wasn’t competitive. I’m glad we faced (Walnut and Notre Dame).” Diamond Bar won the Eastern Divisional championship last year on its way to finishing second in the state. Walnut, third at last year’s divisional, improved to second with a 371 — led by Patricia Wong’s 69 — ahead of third-place Notre Dame (397). All three teams advanced to next Thursday’s section championship at Talega Golf Club in San Clemente.
“Facing great competition only makes you tougher and I think you have three of the best teams in California right here with us, Walnut and Notre Dame,” Diamond Bar coach Tony McCabe said. “We might have shot one of the greatest rounds ever by our team and it’s still close with us and Walnut.” Josephine Chang shot 72, Esther Yin carded a 73 and Joan Park posted a 79 for Diamond Bar, which defeated Walnut for the third time in five head-to-head rounds this season. “I know we can all shoot as well or better than we did (Thursday), so I think there’s still room for us to improve,” said Wu, who posted the lowest individual score among the 77 players.
“This is a good confidence boost for all of us. We just want to go out there and continue to try our best.” Walnut, despite playing without Tiffany Kuroki (away on a recruiting trip to Albany), still had enough depth to advance, with Alison Chang shooting 73, Serena Hou carding a 74, Anabelle Chang posting a 76 and Megan Hou adding a 79. “We knew we couldn’t beat Diamond Bar on this course,” Walnut coach Cecil Woods said. “We needed the course to be as long and as narrow as possible. But with Tiffany back, hopefully we can make a run at them (at Talega). One thing is for sure, with such a young team, our future is bright.”