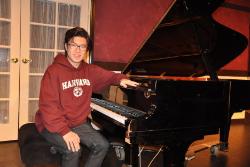 Diamond Bar High School senior David Yu has dedicated his entire life to music – specifically classical music.
“Legend says that I started playing the piano when I was three-years old,” Yu said his parents told him that he was drawn to the sound of the instrument.
And his mother, a piano academy owner and church pianist, saw her tot’s potential and put him on her lap and began teaching the basics in their Seoul, Korea home.
“It turns out I learned fast and I was interested,” Yu said.
All of America will soon be able to hear the 18 year-old perform. The gifted musician will fly to Stanford on November 9 for a taping of the National Public Radio (NPR) Music From the Top program.
Yu will play the first movement of Schumann Piano Sonata No. 2 in G Minor. The radio taping will be held in the Bing Concert Hall at Stanford University on November 10. The show, presented by Stanford Live, will air in early December on KUSC FM 91.5.
“This is one of the top honors a high school musician can receive. From the Top features only the best of the best, students who have a legitimate chance of becoming superstars,” said Diamond Bar High School Instrumental Music Director Steve Acciani.
“The show also looks for students that will have a lasting impact on the field of classical music due to their passion and commitment to their art,” said Acciani.
Yu has also been awarded the Jack Kent Cooke Young Artist Award. The scholarship, funded by the Jack Kent Cooke Foundation, provides opportunities to exceptional young musicians with financial need.  The $10,000 award will help offset the often prohibitively expensive costs of studying classical music at a high level.
From the Top, hosted by acclaimed pianist Christopher O’Riley, celebrates the amazing performances and captivating stories of extraordinary young classical musicians.  Broadcast on 250 stations nationwide to an audience of more than 700,000 listeners, From the Top is one of the most popular classical music programs on radio.
Yu first applied for From the Top as a 7th grader at Chaparral Middle School at the suggestion of Orchestra Director Greg Rochford. A few months after the long, “never-ending” application process, Yu received notice that he was a finalist and didn’t make it to the recording.
He learned later that most finalists on the list are eventually contacted for the national show that is taped around the country.
It took five years for David Yu’s name to make it to the top of the list. In September, he received an email from NPR requesting an updated recording the very same week. The timing couldn’t have been better. Yu had a recital already scheduled that would also be recorded.
“Two days later, I sent it to them online.  And the next day, I got a email from them  - with congratulations!” he said.
Yu says that practicing is the exploring of each piece of music and he likes to compare it to planting a tree.
“You plant the seed, give it the right type of soil and sunlight, nurture it and it grows,” he said.
“Over time, you begin to see things you didn’t see and you get new ideas with every piece,” he said.
At the performance level the music is ready to be shared with the audience.
“This is letting go and it almost happens on its own. Every performance is different and that’s what makes it magical,” he said.
Yu explained that with dedication some things are taken away, but you get much more in return.
“I’m blessed. I have my parents and family’s prayers. They have very high faith in me. It keeps me going,” he said.
Along the way, Yu has had numerous teachers and mentors. Yu currently studies with accomplished pianist Norman Krieger, professor of keyboard studies at USC. Earlier this year, he met Chapman University Conducting Professor Daniel Alfred Wachs during a recruiting visit at the high school.  After they talked, Wachs offered Yu free lessons that range from two to three hours a week.
“It was the start of many good opportunities to come,” he said. Just a few months ago, Congressman Ed Royce (Chairman of Foreign Affairs) wrote a recommendation letter on Yu’s behalf to perform at the White House.
Life became different when Yu developed an interest in orchestra conducting, at a young age, after watching videos of Austrian Conductor Herbert von Karajan.
He began conducting the Diamond Bar High Symphony Orchestra during his sophomore year – and says that also playing the violin has helped understand the musician’s viewpoint.
“It’s my mission to reach the younger generation in the 21st Century. I hate to say it but classical music is slowly dying and it’s important for me to revive it,” he said.
Through the years, Yu has found out something very important to his life – performing outside the concert stage.
He enjoys bringing his music to community events for the American Cancer Society and retirement homes.
“These events show me how much impact the music has on other people,” he said.
“When I see their faces, they’re all smiling and remembering. Sometimes I play hymns for them and they all sing along.”
One day at the retirement home he spoke with an elderly woman with Alzheimer’s disease who he learned had been a pianist.
“She still remembered the music. Those are the things that stay with them for life.”
Print