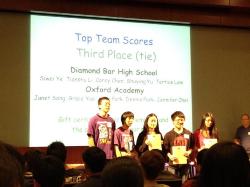 Saturday, November 9, the Brahma Math Team traveled north to Malibu and competed in the brutal Pepperdine Math Competition. The top FIVE on the Team took Third Place! (Photo on right)

There is another competition sponsored by the American Mathematics Association – it’s called Math Madness!!! (think March Madness!)  For the past 4 weeks the Brahma Math Team has been involved in the preliminary rounds.

This week, the “bracket round” begins and your gutsy Brahma Math Team is ranked #1 in Division IIA out of 250 schools that were hand-picked to compete nationwide. The competition is on Thursday, November 14.