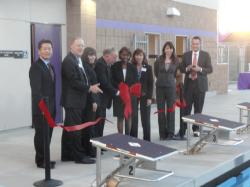 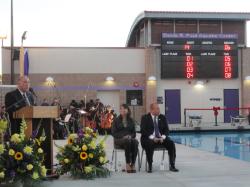 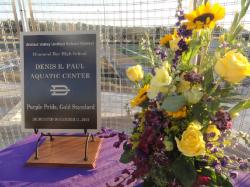 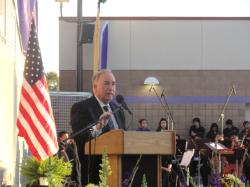 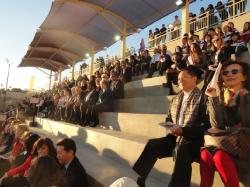 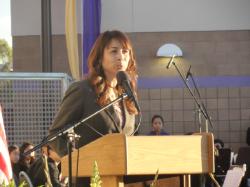 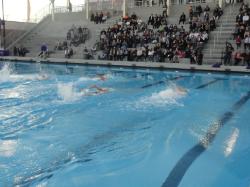 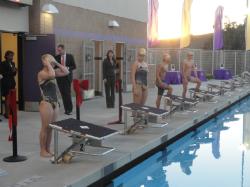 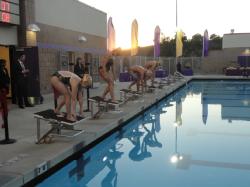 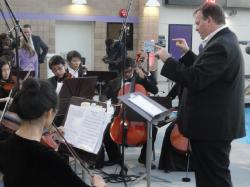 After the ribbon cutting, the Diamond Bar High School Brass Ensemble played "Olympic Fanfare," as the four captains of the swim team stood at the blocks. Principal Catherine Real instructed them to take their marks and after being signaled to dive in, they did just that to applause from the crowd.

Swim team captain Matthew Sia won't get to compete in the new pool because he is a senior, but said he was happy for those who would come after him.

"It's really a new home for the other swimmers coming in," he said. "Instead of practicing in a rival's pool, like at Walnut High, we get to practice here at our home."

The $10.7 million Dennis R. Paul Aquatic center was made possible through voter-approved bond Measures S and Y, passed in November 2007. The cost also includes a neighboring two-story building with 20 classrooms.

Paul, the former Diamond Bar High principal for whom the aquatic center is dedicated, said his family was honored and humbled to have the name on the facility.

He said the honor was a shared one with coaches, staff, fellow administrators, Brahma Boosters, and others in the community who lobbied for a pool for years and helped to get the bond measures passed.

He also gave a nod to Jeff Bloedorn, the school district's director of maintenance, operations, transportation, and facilities.

"In reality we've always had a pool on this campus, at least in pictures," he said.  "The picture changed over the years, but there was always a pool somewhere.  But Jeff Bloedorn and your crew, you got the right location. You got the right pool."

Paul added that while some of the more recent alums did not see the pool built while attending Diamond Bar High, their children might get a chance to enjoy the new facility in the future.

"No matter where life takes you, you will always be a Brahma and this will always been your home," he said. "Today, this home got even more majestic."

Principal Catherine Real lauded Paul for his vision and foresight for the campus from its inception.

"You laid the foundation of the four 'A's, academics, activities, the arts, and athletics and thanks to you, we are taking another smart step in supporting our students, our staff and our community," she said.

The Walnut Valley Unified School District's Board of Trustees awarded the contract to build the 12-lane pool and adjacent classroom project on Oct. 19, 2011.

Besides the pool, the aquatic center includes a locker room with men's and women's restrooms, two fitness classrooms, public restrooms, a coach's room, a pool storage room, a pool equipment room, a team room, and stadium seating with a shade structure.
Superintendent Robert Taylor thanked staff and students for their patience in working around construction.
"This is such a beautiful facility," he said. "I think we can all be proud that this is a facility in our school district."
Board President Helen Hall echoed those thanks and recalled that when she first moved to Diamond Bar in 1980, the campus was just a mound of dirt with a small sign indicating that is was the site of a future school.
It took a long time to build the school, just as it took many years for the pool, she said.
The support of voters helped to make it happen and the district plans to come up with a way that the community can share in the joint project, she said.
Hall added that the two bond measures were split, so that it could really be clear that voters supported the pool.
"It shows you that the community still comes together when there is a need," she said. "We know that in education, there is a balance between the academic and the extracurricular and I can say that our school district has done a fantastic job in putting the two together and really supporting the students here and the community."
Print