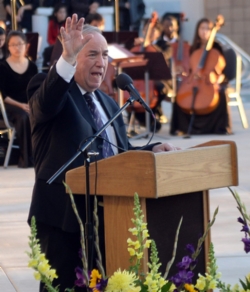 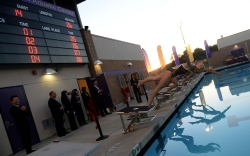 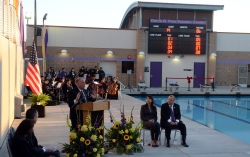 Come on in, the water’s free, free, freezing. Just ask members of the Diamond Bar swim team, who dove into their new swimming pool on a chilly Wednesday.

They were part of a huge party to celebrate the new $4 million Denis R. Paul Aquatic Center. After the holiday break, students will have the opportunity to try out the local high school’s newest addition.

“It was cold, but the new pool is great,” said Matthew Wu, one of the captains on the swim team. The 17-year-old senior was glad that the Brahmas finally had their own pool.

“We usually practice at the Walnut High pool at night,” Wu explained. “Now that we have our own pool, so we won’t have to drive over to Walnut anymore.”

“This center takes us to the next level. I think more kids will come out for the swimming team now that we have our own swimming pool,” the excited Davies said.

The athletic director is looking forward to starting a water polo team. The new Brahma team will have tryouts in the fall for the next water polo season.

The aquatic center is huge with a 12-lane swimming pool and the massive amphitheater seating with shade structures that facing it.

“You might expect something this nice at a college,” said school board director Larry Redinger. “The long wait has been well worth it.” Board president Helen Hall thanked the community for its continuing support. Residents approved construction bonds used in the construction.

Retired principal Denis Paul was proud to have the swim center named after him. Paul noted that drawings of the local high school always showed a swimming pool. But despite many fundraising efforts, the swimming pool never materialized.

“We’ve been waiting 30 years for a swimming pool,” said Principal Catherine Real, who swam the 500 freestyle in high school herself.

“The students and staff are really excited about this grand opening,” agreed Assistant Superintendent Jeanette Ullrich, who also competed on a swim team in secondary school.

“I think this will be a big draw for the high school, it already has great academic programs,” Ullrich added.

In the fall, the local high school opened a new two-story building next to the pool with 20 more classrooms. The math department has been consolidated in the new facility.

Now the students can’t wait to take a dip in the cement pond, which is about half the size of an Olympic pool. They’re expected to begin training after the holiday break.

The proud Brahmas will find everything they’ll need in the sparkling new aquatic center. It will feature locker rooms for both sexes, public restrooms and a coach’s room.

“There will also be two fitness classrooms and a team room,” said Jeff Bloedorn, director of maintenance and facilities for Walnut Valley Unified.

The aquatic center was designed by Aquatic Design Group, which has designed pools for high schools, colleges and resorts throughout the U.S. and Europe, as well as the United Arab Emirates.

The center has a pool storage building and pool equipment building. It also features a new electronic scoreboard and small concession stand.

“The swimming pool has the latest, energy-efficient filtration system and pumps,” the assistant superintendent noted. “We’ve included the piping for solar heating in the future.”

But right now, everyone wants to be the first one to try out the new pool. Cannonball!