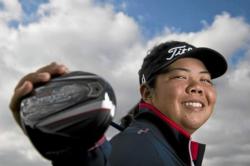 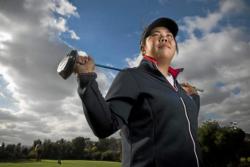 There is no “I” in golf, but the sport is definitely about individuals.

Forming into a team for a bunch of golfers, especially those who travel to play in national tournaments, can be a difficult task.

But it is very easy, Wu said.

“I get pumped up easily,” the junior said. “So for me, getting them pumped up is easy. It’s so much fun to play as a team.”

Wu is definitely the Brahmas’ spark plug. She consistently shoots under-par, helped Diamond Bar to its first CIF-Southern Section Northern Division title after winning the Eastern Division crown last year. Diamond Bar finished third in the CIF-SS state qualifier, the de facto CIF-SS finals, losing out on second on a card-off to Walnut after they were tied.

Wu could not play in the state finals, in which the Brahmas finished second, again on a card-off with Walnut, because she was preparing for a junior national tournament.

Wu won the San Clemente Rainbow tournament, was the low medalist in the CIF-SS Northern Division finals with a 5-under-par 67 at Soule Park in Ojai and then took second place in the CIF-SS Individual finals at Talega Golf Club in San Clemente. She shot a 4-under-par 68 to tie for second and then defeated Erin Choi of Mira Costa on the third playoff hole.

Wu committed to UCLA last year and that has still no changed.

But she said her game still needs work to play at the top level of collegiate golf.

“It’s the mental aspect,” she said. “It’s just all the little things that I need to work on.”

Wu still has plenty of time and tournaments to work out those details.