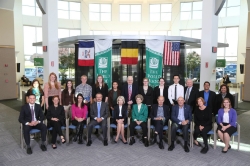 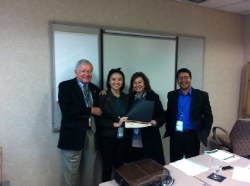 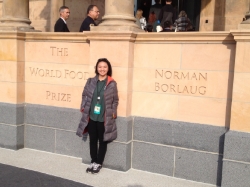 Diamond Bar High School senior Ashley Xie was among the top students in the country selected to participate in the prestigious World Food Prize Global Youth Institute during the Borlaug Dialogue International Symposium.
The event drew 1,500 people from more than 65 countries to discuss the world’s hunger and food security issues.
Students from across the United States and abroad researched global food security issues in the country of their choice, and then submitted papers on those critical topics, which they also presented to renowned experts and scientists.
Xie presented a paper on the theme "Ending Hunger In Our Lifetime: A Call to Action" and participated in roundtable discussions with experts in industry, science, academia and policy. Research for the paper focused on major issues in global agriculture, development and food security in developing countries.
Participants also helped with a hands-on service project packaging meals for Outreach International, a hunger-fighting organization that serves people in Iowa and abroad, toured an Iowa farm, and took part in an Oxfam Hunger Banquet to experience the realities of global hunger and poverty.
“'My learning experience at the Global Youth Institute was extremely eye-opening,”Xie said.
“Not only was I able to meet new friends across the nation, but I was also able listen to and meet today’s world leaders fighting food insecurity. The lack of education, infrastructure and government are only a few of the critical challenges people face today. I aspire to be a part of the next generation to tackle these problems," she added.
Xie and 150 other high school students had the opportunity to interact with a diverse group of internationally renowned World Food Prize Laureates and leaders in food, agriculture and international development. The three-day institute was held October 17-19, 2013 in Des Moines, Iowa.
Global Youth Institute attendees participated in symposium sessions featuring:  His Excellency Ólafur Ragnar Grímsson, President of Iceland; His Eminence Cardinal Peter K.A. Turkson of Ghana, President of the Pontifical Council for Justice and Peace, Holy See, The Vatican; His Excellency Akinwumi A. Adesina, Honorable Minister of Agriculture and Rural Development, Nigeria; Former British Prime Minister Tony Blair, Howard G. Buffett and Howard W. Buffett who announced the creation of the 40 Chances Fellows program, a partnership of the Howard G. Buffett Foundation, Tony Blair’s Africa Governance Initiative, and The World Food Prize; The CEOs of many of the world’s major agribusiness companies: DuPont, Elanco, Kemin Industries, Monsanto, Novus International and Syngenta; and Researchers, non-profit leaders and smallholder farmers from around the globe.
The World Food Prize was founded by Nobel Peace Prize laureate Dr. Norman Borlaug to recognize and inspire great achievements in improving the quality, quantity and availability of food in the world.
This year’s World Food Prize events kicked off the beginning of a year-long anniversary celebration in honor of Dr. Borlaug’s 100th birthday that will culminate in fall 2014.