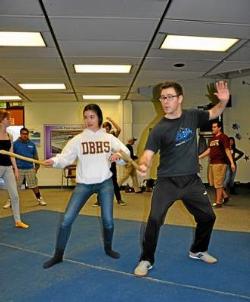 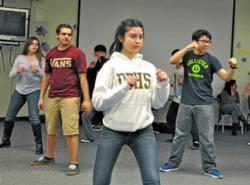 On guard! Brahma thespians may be well-known for their repartee, but now they’re adding the riposte to their acting abilities.

In fact, the Diamond Bar students learned how to stage exhilarating fights for the spring musical “The Pirates of Penzance.”

“The play has two fight scenes, so we wanted to show our actors and actresses how to safely stage a sword fight,” explained director Beatrice Casagan, the new drama teacher.

Casagan called on a friend Doug Oliphant to teach the combat workshop. Oliphant is the artistic director with the Drive Theater Company in Los Angeles.

“Stage fights are choreographed dances that we can safely perform night after night in a show,” Oliphant said.

Unlike a real fight, when you never know what’s coming, stage fights allow the actors to know exactly what blow is coming next. Add in some sound effects, and the stage fights can become very convincing.

But right now, the Brahmas were learning the basics. How to stand, how to throw a punch, even how to react to a fake blow.

“In fencing, you would stand sideways to present the smallest possible target to your opponent,” Oliphant said. “In a sword fight on stage you face the audience so they can see you.”

The group of young men and women practiced moving as they attacked and retreated in mock battles. Some got carried away, falling to the mat during a hasty retreat.

Soon, they were flowing smoothly back and forth in mortal combat. Thrust, parry, riposte — the young pirates seemed to enjoy themselves.

Next, it was time to get up close and personal for a little hand-to-hand combat. How do actors punch each other without damaging anyone?

As in magic, it seems a little misdirection achieves the interesting effect. Oliphant showed the teens how to throw a roundhouse in slow motion.

The director put his whole body into the punch, slowly bringing it around in a long follow through. Everyone mimicked his theatrical blow.

The, Oliphant added a sound effect, thumping his chest with his free hand while everyone was distracted by his exaggerated follow through.

It took a while for the teens to coordinate the sound effect with their body blows. But soon, the classroom resounded with a chorus of thuds, as the kids threw the imaginary punches.

Of course, none of this would matter if the opponent didn’t react in the appropriate manner. Very few people continue to smile after you punch them in the mouth. If they do, it’s best to run away as fast as you can.

Fortunately, Oliphant had a class full of actors and actresses. His students displayed a full range of human emotions as they rocked back from the fake punches.

Some may have gotten a little carried away, reminding us of Sylvester Stallone in some of his famous boxing scenes in “Rocky I, II, III, IV and V.” Don’t laugh, the series grossed more than $1 billion at the box office.

While Diamond Bar’s production of “Pirates of Penzance” probably won’t top that, at least the fight scenes will look realistic.

Next, the students were to audition for the comic opera on Feb. 10. The director was looking for actors, singers and dancers with great comedic timing.

“Especially interested in classically trained voices, but if you haven’t had classical vocal training, we’ll teach you!” the casting call proclaimed.

“I really want to be one of the pirates,” admitted senior Elven Tsao. He has already performed in many of the school plays.

Junior Catherine Larcheveque hoped to play one of the daughters in the comic opera. The 17-year-old helped Oliphant demonstrate how to hold a sword properly.

“I think the combat class is interesting, that’s why I stayed after school to attend the workshop,” Catherine continued.

Most of the students already know how to act, some sing and many dance. Now, the young pirates know how to throw a punch and swing a sword.