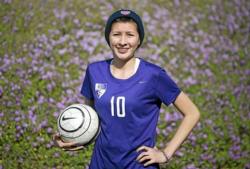 
Marissa Favela has fought hard to play in the first-round of Friday’s CIF-Southern Section Division 3 playoff against visiting Mayfield.

While teammates were battling on the field, the Diamond Bar High School girls soccer player took on cancer.

The 16-year-old recently returned to school and the sport she loves so much. Though still recovering her strength, the midfielder has scored goals in the last two games.

But just returning to the soccer field has made her a winner in the eyes and hearts of her coaches and teammates.

“I think she has inspired all of us,” coach Matt Brummett said. “It changes your perspective. While we were fighting on the field, Marissa was fighting for her life.”

The junior has been playing on the Brahma’s soccer team since her freshman year. She had been named to this newspaper’s All Valley Team for her play. She scored the game-tying goal in a 2013 quarterfinal playoff against Bishop Amat that sent the game to overtime.

Fortunately for Favela, her playoff dreams are not finished.

Coach Brummett was impressed when the young woman asked to return to the soccer team in midseason.

“She had such determination to play on the team again,” he recalled. “Marissa’s tough, fighting for everything.”

Though still recovering from surgery and chemotherapy, Favela felt it was important to return to the team when she returned to the local high school.

“My illness began when doctors discovered a benign tumor on my ovary last year,” she explained.

Surgeons removed the tumor at Children’s Hospital Los Angeles. But another tumor appeared, so doctors decided further surgery would be followed by several courses of chemotherapy.

“I was too sick to return to school, so I studied at home the first semester,” the Brahmas standout said. “The chemo made me nauseous and very tired.”

A third tumor was removed shortly before Christmas. Now, doctors screen her every six weeks with an MRI.

Throughout her ordeal, Favela’s spirits have been buoyed by family and friends such as teammate Angie Puerta.

The 17-year-old junior would visit her friend at Children’s Hospital as well as at home in Diamond Bar.

“I was very sad because she was so sick, but I was grateful when she began to feel better,” Puerta said. “I know how much she loves soccer, so I wasn’t surprised when she came back to the team.”

Favela, who has dreams of playing at Oregon State University, admits her strength and stamina is only half of what it was before her illness. But she says she feels a little better every day.

Favela didn’t look like anyone overcoming an illness at Wednesday’s practice, she looked like her old self, getting ready for another playoff run.

“We’re dedicating our season to her,” said Assistant Coach Jameson Campbell. “She’s a tremendous ball handler, so I know she’ll help us in the playoffs.”