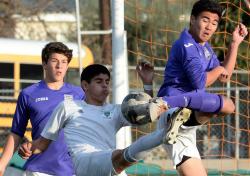 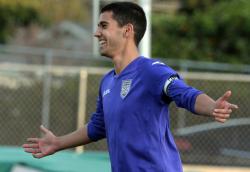 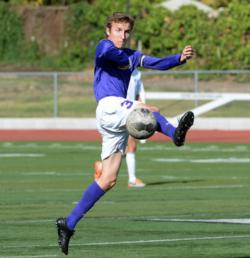 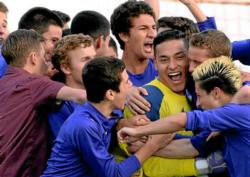 UPDATE 2/27/14- Our boys soccer team has had a great season. They lost a close match today in the third round of CIF competition. Final score 1-2.

After visiting Diamond Bar and Monrovia played to a 2-2 tie after 80 minutes of regulation and 20 minutes of overtime, the Brahmas prevailed, outscoring the No. 2 seed Wildcats 3-2 on penalty kicks to advance to Thursday’s Division 5 quarterfinal. The Brahmas will play host to Baldwin Park.

“I just had to zone everybody out, just focus because it was me and the goalie” Brose said. “I saw him move a little bit early. I put it right down the middle.”

“You can’t teach stress,” Monrovia coach Mike Williams said. “It was a great game. When it comes down to PKs, there is not much you can say about that, right?”

The Wildcats had the early penalty-kick lead. Alfredo Maciel scored on the first shot and Wildcat goalkeeper Max Medley blocked Kelly Craft’s shot. Both teams missed on shot No. 2, Matt Moningka’s kick hitting the crossbar and bouncing straight down, where goalkeeper Manny Perez batted it away, and Guy Horcasitas’ kick going over the goalpost. The kick by Monrovia’s Antonio Rosas hit the post and Andre Gamboa scored to tie it after three attempts from each team at 1.

Monrovia’s Chris Wong sent his kick over the post and Connor Donahue found the left corner to give the Brahmas a 2-1 lead. Joel Cortez tied it and Brose ended the game.

“I have never seen it go to 1-0 and everyone misses,” Diamond Bar coach Kemp Wells said. “After playing 100 minutes, the guys were just beat.”

The Wildcats held leads of 1-0 and 2-1. Daniel Hoefferle scored in the game’s fourth minute on a long pass from Moningka.

“I could not believe we matched up so early in the playoffs,” Wells said. “These guys are a lot better than I thought they would be. They come in waves. They hook up like a web and come flying. We misplayed (Hoefferle’s goal). It’s been our Achilles heel.”

The Brahmas tied the game 14 minutes later. Jordan Wong’s throw-in went to Craft, who headed the ball in.

The Wildcats took a 2-1 lead 26 minutes into the second half. Frankie Gutierrez’s throw-in went into the box area, where both the Brahmas and Wildcats got equal shoulders on the ball. It popped out to Chris Wong just outside the top of the goalie area and he sent a pass into Moningka for the score.

The Brahmas somehow found a way to send the game to overtime despite being outshot 11-7 in the second half. With three minutes to play, Gamboa had a 35-yard free kick. The ball was deflected out of bounds by the Wildcats, resulting in a corner kick just a few ticks under the two-minute mark. Gamboa’s corner kick went past the goalmouth to Keleo Torres, who practically kneeled down and headed the ball through three Monrovia falling players, including Medley, to tie the score.

“Both teams fought very hard,” Brose said. “We kept playing through pain and everything. When we scored we continued playing hard. This is a huge win. Its over the No. 2 seed. It’s an honor to go this far.”

Both teams had opportunities in overtime, but players were coming up with cramps and wide shots.

“It’s such a hard defeat,” Moningka said. “We were so close and right there. But that’s soccer. Everything changes in seconds.”