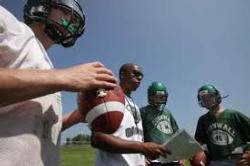 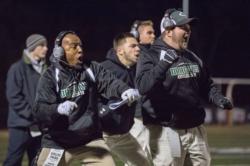 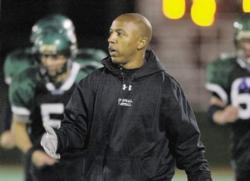 Diamond Bar High School looked far and wide for its next football coach and found him in New York.

The school announced Wednesday that Marcus Hughes, who spent the past six seasons at Cornwall Central High School in New York, is the Brahmas’ new varsity head coach.

“We expanded our search nationwide and coach Hughes stood out far and above all of the other candidates we had,” Diamond Bar athletic director Kurt Davies said. “His track record not only with winning and losing but with developing young men and developing them academically, that stood out. He’s definitely going to be the leader we’re looking for, for a long time.”

Hughes, 34, replaces Ryan Maine, who resigned in February after three seasons with a 15-17 record and one trip to the CIF-Southern Section playoffs.

Hughes is originally from Colorado and was looking for a job in California in order to move here with his wife and children. He went 67-13 in seven seasons at Cornwall and went to the state playoffs in New York the past three seasons.

“I was extremely picky about applying for jobs in California,” Hughes said. “I saw Diamond Bar on the Internet and the first thing I looked up was the academics because of my three daughters. And I went back and researched the history on Diamond Bar football.

“I decided to apply and talked to Kurt and he sounded like a great guy. When you interview for jobs, you can tell a lot about a school by talking to the committee and they do a great job over here.”

The Brahmas were 7-5 this past season and upset 2012 Southeast Division champion Downey in the first round of the playoffs before losing to 2013 champ La Serna in the second round.

Diamond Bar is currently slated to play in the newly formed Palomares League next season, but that’s somewhat in the air as the Mt. SAC Area for re-leaguing will meet later this month to alter several local leagues in order to fit in Damien/St. Lucy’s.

Davies said that Diamond Bar had 140 applicants for the job.