Math Team Places Fourth At Math Day At The Beach 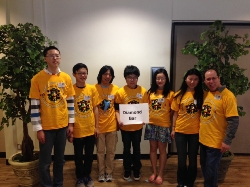 Your Diamond Bar High School Math Team has been busy.

In the California Math League, the Brahmas finished in the top 10 in California. Senior Corey Chen finished with a perfect score on all six contests – a first for Diamond Bar High.

A few weeks ago, four Brahmas traveled up north and competed in the Stanford University Math Competition – Steven Ye finished fourth overall in the Algebra section.

Thursday, March 13, we had 13 Brahmas complete the American Invitational Math Exam – the 2nd level of the American Math Exam.  We’ll see how they did in a few weeks.  That’s more competitors for the AIME than we've had in a few years and is quite an accomplishment!

These competitions are open to any student who wants to join the Math Team.  Congratulations to all!