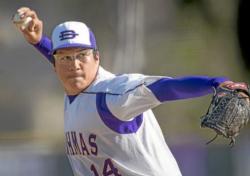 Diamond Bar High School graduated arguably its top two players from a team that reached the Southern Section baseball quarterfinals last season, but the Brahmas are proving that their cupboard is hardly bare.

Jacob Cooke had two hits and three RBIs and Chris Sanchez was steady on the mound as Diamond Bar continued its strong start to the season with a 7-3 victory over visiting Monrovia in a nonleague game Tuesday.

The Brahmas, also getting a hit and two RBIs from Jonah Yang and two hits from Gabriel Duenas, improved to 6-2. Monrovia, getting two hits from Erik Cox, slipped to 3-2.

“We took a lot from each other (last year),” said Sanchez, who improved to 3-0 after giving up eight hits and striking out five. “We put in more work (this season), because we know we can’t just expect to achieve that level again, especially with some new teammates.

“(It’s been) a very strong start, just some key mistakes (in the two losses). Clean it up a bit and we’ll be good.”

The Brahmas were not perfect Tuesday, but put Monrovia in an early hole, taking a 4-0 lead after two innings. The Brahmas scored three runs in the fifth to put it away.

Diamond Bar, after taking a 1-0 lead in the first on a RBI single by Yang, loaded the bases with no outs in the second and took a 3-1 lead on back-to-back RBI singles by Cooke and Josh Sanchez. Nolan Luzzi, who singled, then scored on a fielder’s choice to make it 4-0.

Brett Tweedie had a RBI single and Cooke a two-run single to make it 7-2 in the fifth.

“It was right there and I just swing the bat,” Cooke said. “It got through.”

Monrovia, after following behind 4-0, made it 4-2 in the third on singles by Devin Ayala and Nick Carino, a throwing error and a sacrifice fly by Juan Quinonez. But Chris Sanchez ended the rally by striking out Jacob Arfman to end the threat.

“We tried to come back,” Cox said. “We just didn’t hit well in the clutch that much, but almost. We’ll get that straightened out.”

Sanchez was a reason for it Tuesday. He got out of the jam in the third, then turned away another Wildcat rally in the fifth. getting Quinonez on a groundout with two outs and runners on first and second.

Monrovia made it 7-3 in the seventh on a walk to Cox, a single by Zach Zepeda and a throwing error. Tweedie, who pitched the seventh, got Fidel Jiorge to end the game.