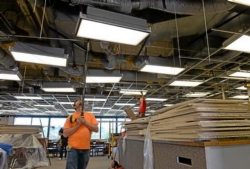 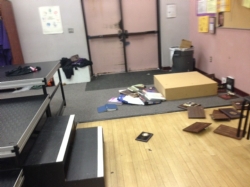 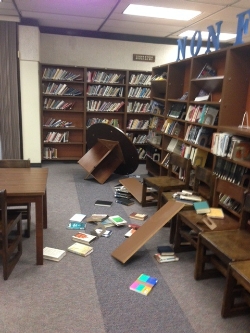 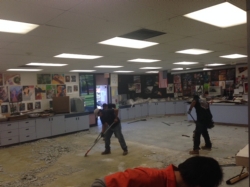 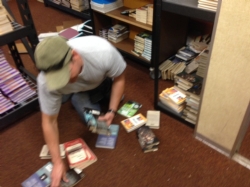 The La Habra quake gives a whole new meaning to spring break. Diamond Bar High has been closed this week, while work crews repair damage caused by last week’s earthquake. The earthquake caused $150,000 to $200,000 in damages, according to Jeff Bloedorn, director of maintenance and facilities.

“The entire Diamond Bar High School campus is closed to all groups and individuals until further notice,” wrote Principal Catherine Real in an email on March 30. “Entrance to the campus is prohibited due to recent earthquake damage and ongoing seismic activity. This includes all buildings, grounds, facilities and athletic areas.”

School officials closed the school for safety. They called in a structural engineer to check the sprawling campus on Monday. Bloedorn said the engineer reported that the buildings were sound and gave them a list of repairs to make.

The damages had been caused by the magnitude-5.1 temblor that shook the Southland on Friday. Maintenance men found water leaking from a pipe in the art room Saturday morning. Crews shut off the water supply, but the floor and storage room had already been flooded.

“The water warped the 20-year-old floor covering, which has been removed,” Bloedorn said.

A Santa Ana flooring contractor was cleaning the concrete floor, before installing a new commercial covering. The storage room has also been cleaned out.

“There were hundreds of small paint cans knocked off the shelves,” said Doug Mefford, operations manager for the high school. “I was surprised that none had broken open.”

Bloedorn said a contractor was also replacing the ceiling in the high school library. The old hanging ceiling was sagging from quake damage.

“It had the old, 5-foot squares, which are too expensive to replace,” the maintenance director explained. “So we’re putting in a new hanging ceiling with 2-foot by 2-foot squares.”

Other workmen were also patching small cracks in the outside stucco. The new $10 million two-story science wing and aquatic center were not damaged.

“We had a great response from the superintendent and maintenance staff,” said school board member Larry Redinger. “They’ve been on top of it ever since they found the damage at the high school.”

Contractors were well on their way to having the high school up and running for the reopening of school on Monday.

Students and staff will find several other improvements when they return. Road workers were repaving the parking lot in front of the high school gym.

And other workmen were installing new artificial turf in another area. The new grass replaces an old artificial surface used by the band and color guard.

“My daughter was in the color guard,” Redinger said. “And the old surface would get so hot that it was hard to practice on.”

Everyone agreed that the timing was very fortunate. The high school had already closed for spring break. But this wasn’t the kind of break they were hoping for.