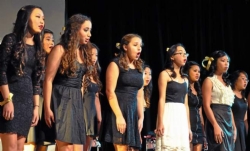 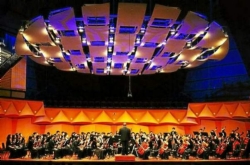 And the Grammy goes to Diamond Bar High School.

Diamond Bar celebrated its selection as one of only a dozen high schools picked as a Grammy signature school with a gala Monday night, April 21, in the Diamond Bar Center.

In fact, the local high school was named the best, earning the title of National Grammy Signature School in addition to receiving $6,000.

“Through this Grammy in the Schools initiative, the Grammy Foundation is able to provide critical financial resources and bring attention to the excellence of music programs in schools across the United States,” said Neil Portnow, President and CEO of The Recording Academy and the Grammy Foundation.

The foundation will recognize Diamond Bar during a special concert on Saturday in the Mt. San Antonio College theater. The community added its support by throwing the semiformal ball.

The Brahmas and their supporters gathered Monday to honor the musical program under teachers Steve Acciani and Marie Sato, directors of instrumental music, and choir director Patty Breitag.

“We are incredibly proud of Patty, Marie, and Steve for this amazing accomplishment,” said Principal Catherine Real.

In March 2013, the Brahmas orchestra won second place in the National School Orchestra Championship. And many individual musicians have earned national recognition.

In December, Yu was asked to perform on NPR’s “From the Top” radio program. Yu flew up to Stanford University to record his segment in the new performing arts center. The pianist received $10,000 from the radio program’s Jack Kent Cooke Young Artist Award.

“But we didn’t win the Grammy just because of our superstars,” Acciani explained. “I think the foundation was looking for a program that reaches out to every student.”

“We have such an extensive and diverse program that I thought we would do well in the evaluation,” Acciani said.

Diamond Bar had also been named a Grammy signature school in 2009.

Still, the Brahmas had their work cut out for them when they were named a Grammy semifinalist.

“We had to make recordings of all our instrumental and choral groups to send to the judges,” Acciani recalled. “That was a lot of work, but our students are used to recording their performances with the high-tech equipment our community has provided.”