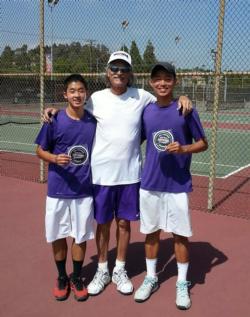 Congratulations to Kenny Sakata and Minsong Hsu, 2014 Hacienda League Tennis Doubles Champions!
Kenny and Min took out Walnut High's doubles team in the semi-finals and then played three tough sets against the #1 seeds from Rowland in the Finals.
Kenny and Minsong fell behind early in the third set, 1-4. They fought back and won the next five games to win the set, 6-4, and the league title for the second time. As seniors, a great way to finish a career as Brahma athletes! Congrats Min and Kenny!
In singles, the best match of the day was in the semi-finals when freshman Neil Tengbumroong and Rowland’s #2 player, senior Adrian Chau, played for over three hours! Match point ended with a missed shot by Adrian, who then collapsed on the court with body cramps. Neil then followed suit shortly after with his own set of leg cramps!  The win put Neil in the Finals against the #1 seed from Rowland. Unfortunately, Neil was unable to recover and conceded the title to Rowland’s Kevin Vuong. As a runner-up, Neil qualifies for the CIF Individual’s tournament, along with Minsong and Kenny. After enduring much pain, Adrian did recover.
Go Brahmas!
Print