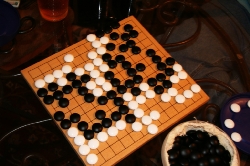 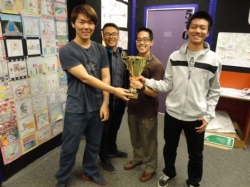 March 22 and 29, an online GO tournament was hosted by the American Go Honor Society in conjunction with the American Go Association. Diamond Bar High students Yunxuan Li, Andy Shin and Chanho Lee won the Varsity division. This is made even more impressive by the fact that this is the first year Diamond Bar High has had a Go Club.
GO is a board game for two players that originated in China more than 2,500 years ago. The game is rich in strategy, despite its relatively simple rules. (CLICK HERE for more details about the game.)
The School Team Tournament drew 84 kids and teens, reports organizer Calvin Sun. March 22 and 29, the event is organized by the American Go Honor Society (AGHS) every year. “28 teams of three competed in four divisions to claim the title of best youth team in North America,” said Sun, “ranks ranged from 25k to 6d.” Top honors in the Varsity division went to Diamond Bar High School, CA. “I want to thank AGHS and our tournament organizers for running such an amazing event,”  said team leader Yunxuan Li 6d. “It was very fun and exciting to compete with other go clubs throughout North America. Our club started this school year (see E-J 11-5-13) and I was pretty surprised that we won the tournament after such a short time period. We got lucky in a lot of our games.  This is a great event for our youth players and it is really wonderful to see new clubs playing in it and enjoying it every year.”
http://www.usgo.org/news/2014/05/84-compete-in-school-teams-tourney/
Print