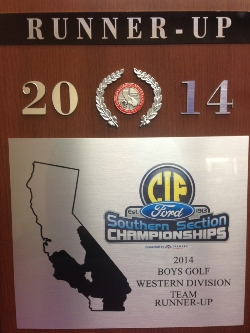 Congratulations to the Diamond Bar Golf Team who qualified for TEAM CIF FINALS with a team score of 372 at the CIF Western Divisional Finals.

Diamond Bar was the runner up team, only 6 strokes behind Mater Dei, despite missing Dean Sakata, who was back east in an individual golf tournament.
The Brahmas will be playing next Tuesday, May 27, at Mission Lakes for the CIF TEAM/INDIVIDUAL FINALS.
Print