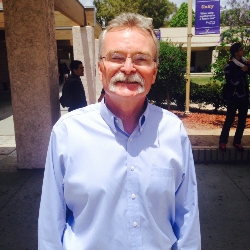 At the end of this school year, grade level coordinator Jon Goode will be retiring from the Walnut Unified School District.  Mr. Goode started his career thirty-five years ago as a teacher at Walnut High School.  He spent fourteen years in the classroom at both Walnut High and Diamond Bar High.  He was the head basketball coach at both Garey High and Walnut High, as well as being an assistant at Diamond Bar and Rio Hondo College in his twenty-five years as a coach.  Jon graduated five classes of seniors (1995, 1999, 2003, 2007 and 2011) in his twenty-two year career as a GLC at DBHS!

Mr. Goode has been the consummate professional during his career in the district.  He is most noted for his uncanny ability to create positive relationships with parents, staff and students.  His attention to detail is second-to-none. He always gives you a straight answer.  Because of this, he has gained the respect of his colleagues.

The Diamond Bar community and Walnut Valley Unified School District were lucky to have such an individual.  He will be missed. We wish him well in his future endeavors.

As a result, Mr. Gonzales will take Mr. Goode's place as the counterpart to Mrs. Sonja Burns.  This change will officially go into effect at the end of the 2013-14 school year.  Interviews for the open GLC position will take place soon. An individual will be selected in the near future.  Once selected, the class of 2016 will be notified.