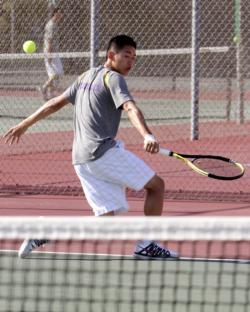 Our boys tennis team had a great season this year, meeting all expected goals and then some. Wednesday, May 21, as expected in the CIF Semi-Finals,  the Aztecs of Palm Desert stood up to their #2 ranking, took control of the match midway through the first round and never let up. Even with their #1 player out of the line-up,  our team was only able to win three sets. Our season ended with a 3-15 defeat. Our boys had a great year. 2015 could be even better, as our entire singles line-up returns along with one of our top doubles teams. Minsong, Kenny and Neil still remain in the Individual CIF competition next week. Congratulations to Garrett Masuda for being elected Captain of next year’s squad!

Thanks for all those who encouraged the boys.