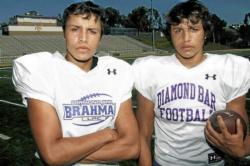 One can’t blame identical twin brothers Tyler and Kyle Peterson of Diamond Bar for wanting to have a lot of fun at others’ expense.

So a couple of years ago Kyle took a seat in his brother’s history class. After 10 minutes or so Tyler snuck into the room, asking the teacher to remove the “imposter.”

Teacher George Harderson was not amused.

First-year coach Marcus Hughes has also had trouble figuring out who is who, although the problem was remedied recently when Tyler got his hair cut.

“When I first got here I mixed them up all the time,” Hughes said. “They even have the same mannerisms. There was no easy way to tell them apart.”

The 17-year old twins are rarely apart. They have the same circle of friends, although Tyler also has a girlfriend. When they do argue it is usually over something trivial - what movie to watch, where to stop and eat on the way home from practice.

They admit they each occasionally need their own space, so if one makes plans with friends, he might not tell the other.

“It really doesn’t happen very often,” Tyler said. “But there was once a group of us were going to the beach and I didn’t tell him.”

Kyle has returned the favor as well.

“I went to grab something to eat and didn’t let him know,” he said.

The brothers are hoping a strong showing goes a long way in helping the Brahmas contend for a title in the new Palomares League. Their season gets underway on Aug. 29 with a nonleague game against Montebello.

Tyler is in his third year as the starting quarterback, having thrown for 1,969 yards and 18 touchdowns with nine interceptions last year as a junior.

Kyle, the older twin by 20 minutes, was the team’s fourth-leading receiver last year with 20 catches for 251 yards. But with top receiver Cordell Broadus (60 rec, 685 yards, 8 touchdowns) transferring out to Las Vegas Bishop Gorman and All-Inland Valley selection Tyler Brown graduating, Peterson is expected to have a more prominent role in the potent offense.

Hughes says both are such tremendous athletes they’ll also see some time on defense although he plans to pick and choose his spots when it comes to using his quarterback there for obvious reasons.


The bond that comes with being not just brothers, but twins, definitely helps. The two recall a game last year in which Kyle ran a different rout on a short pass play than what was drawn up.

“It was supposed to be a curl,” Kyle said. “He was being blitzed by a linebacker and never even really saw me but he knew I was going to run the post instead. Neither one of us had to say anything.”

Kyle hasn’t been as fortunate but is hoping a more high profile role in the offense this season lands him a couple of options. The brothers, who also have an older sister, say they’d like to go on to the same college but it is too early to tell whether or not that is in the cards.

They admit they almost wouldn’t know how to react if they weren’t playing on the same team. They played baseball together for 10 years and got their start in sports playing soccer. That was before father Kent decided not to sign them up for soccer and enlisted them in football instead.

“We have always played together,” Tyler said. “It would be strange not to have him there or not be on the same team.”