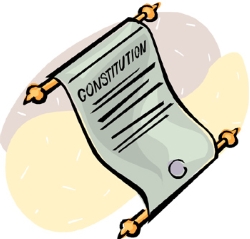 Diamond Bar High School’s Constitution, a document that was ratified in 1983, is steeped in 32 years of tradition. Even with such a rich history, the United Student Body decided that it was time to update the Constitution to meet today’s standards.

USB advisor Chelsea Grunseth, and USB Attorney General senior Alisa Nyugen-Le, reviewed the amendments of the Constitution this summer and concluded that an update was necessary. The reason for this action was to insure the Constitution’s accuracy by removing outdated clauses and amendments that do not follow the “The Brahma Code” of today. As of now, USB has yet to decide when the ratification and distribution of the Constitution will take place, but its goal is to finish this project before the end of this semester.

“It’s necessary to periodically review our constitution and by-laws in order to insure that it stays up to date,” Grunseth stated.

Although they expect only minor changes, USB believes that it will help get rid of clauses that do not follow school regulations and also help enforce “The Brahma Code.” Alterations such as changing the descriptions of certain USB Commissioners’ roles and the purpose of purchasing an activity card will be reviewed and updated. USB will also be adding a new position of Spirit Commissioner to DBHS’s Constitution while simultaneously removing the position of Commissioner of the Sierra League Affairs, since DBHS is no longer a part of the league. Other additional updates to the Constitution will definitely be made, such as the by-laws, but it has not yet been fully determined which part of it will be changed.

In order for Diamond Bar High’s Constitution to be ratified, USB must propose the amendments to the Executive Board along with a petition containing 100 students’ signatures. Then the USB president will read the proposed amendments at a meeting with the Executive Board and set a date for the vote to take place. The Board members will then review it and edit it as needed for clarity.

“We want to make the process as transparent as possible,” Grunseth said.