The Rise Of Brahma Water Polo 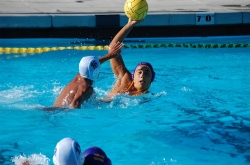 Since this is the first year of the new team, there are not many students with knowledge of the sport. In fact, when they were recruiting students for the team, there were no try-outs for water polo. Anyone who was interested in playing this game was encouraged to join during the summer and during this school year.

The new team has only a few experienced swimmers. Before Sophomore Diego Hammond joined the team, he spent five years playing water polo for a club. Seniors Isaac Cortez, Alexander Wang, and Derek Peng along with junior Dylan Lee and Hammond will play a big part of this season.

“We just help everyone else with things they struggle on and cheer each other on when doing drills or playing matches,” Wang said. 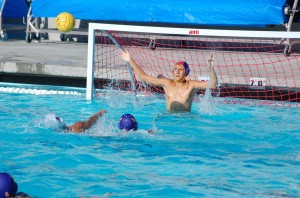 All levels of water polo are scheduled to practice five to six times a week. The varsity team practices usually last three hours while the junior varsity and frosh team practice for two hours. Captains for water polo have not been selected yet.

During their practices, the Brahmas go through intense drills and scrimmages. They first warm up by swimming 300 meters. After, they tread forwards, backwards, sideways for 200 meters. They, then, practice around 64 laps run-swim-runs, exercises where athletes swim to the end of the pool, climb out, do five squats, and jump. Usually they will finish drills with “War,” an exercise when the team wrestles each other underwater. Afterwards, the team does head up and backward sprints for about 20 laps and finish the conditioning drills by filling up and holding up a gallon of water in the air with their elbows crossed for a minute ten times in order to improve their treading. At the end of practice, they finish off with scrimmages.

Over the eight week long summer league program, the water polo team played around 30 scrimmages with different high schools although they only had a week of practice prior to these matches. Unfortunately, most of the games that they played were losses because they were still adjusting to the rules, how the games are played, and the environment that they. The Brahmas did win a few matches but it did not matter to coach Matal because winning was not important to him in those matches.

“It was not really much about winning or losing. It was about gaining the game experience since majority of the players on the team were new to water polo. Some of them had some strong swimming backgrounds but none of them, for the most part, were equal as far as their experience in water polo. So it was more about getting them the exposure,” coach Matal said.

For this season, coach Matal does not expect much from his players except that they improve and gain experience after each and every game.

“It is a brand new program, so we are just looking for a stepping stone for the future,” coach Matal said.