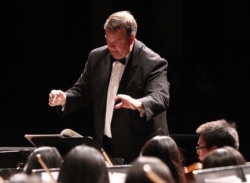 While the ceremony is held to present artists with the recording industry's most prestigious award, The Recording Academy and The Grammy Foundation will also honor one local hero.

For the second year, the organization will recognize a music educator who has "made a significant and lasting contribution to the field of music education and who demonstrate[s] a commitment to the broader cause of maintaining music education in the schools."

Last year's winner Kent Knappenberger from the small town of Westfield, New York, shared how the award created a paradigm shift in his school.

"It's still impacting me and it's impacting my students," Knappenberger said.

And even though he received the award in February, he's still seeing the effects.

"There's a joke with me and my band director. Until they crown the next Miss America, you're going to be pretty busy," Knappenberger said.

This year, 7,000 nominations were submitted from all 50 states. The 25 semifinalists have been announced and come from 25 cities across 17 states.

All semifinalists will have the chance to earn $6,000 for their music department through the Ford Drive 4 UR School program.

Ten finalists will be announced in December and will be recognized for their impact on students.

The winner will be announced during Grammy week 2015 and will be flown to Los Angeles to accept the award and a $10,000 honorarium.

As exciting as the award is, Knappenberger said there's still more to be done.

"The national average of the kids we impact is 12 percent. We need to think differently how we can deliver our subject area to a broader population and a changing population," Knappenberger said.

Here, announcing for the first time, is the list of the 2015 Grammy Music Educator Award semifinalists: