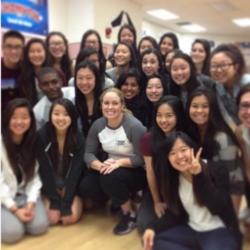 I am pleased to announce that the WVUSD school board approved Janna Van Horn Wednesday evening, October 1,  as our new Activities Director.  Her predecessor, Chelsea Grunseth, has become the assistant principal of Townsend Junior High School in the Chino Valley Unified School District.
Janna Van Horn is a proud 1996 Brahma alumna.  As a student, Janna was involved with the various Arts programs at Diamond Bar including Drama, Dance and Musical Theater.  She represented Diamond Bar in her junior year as a dance soloist, earning the title of Miss Dance/ Drill Team California.  She was an officer of the dance team and participated in the very first musical, Oklahoma!, when the DBHS Theater was brand new!
After graduating with a B.F.A. in Dance Performance from Long Beach State, she was brought in as a Performing Arts Coach to work with the dance team.  In 2001 she began teaching dance full time and took over the Dance Department.  In the years as the Dance Advisor she has helped to promote school pride and spirit through dance.  Janna has helped prepare students for various school activities and events including rallies, concerts and competitions.   Her dance teams have earned recognition at the Regional, State and National level.  She is responsible for establishing the school’s very first competitive All-Male team.
Janna was honored to be recognized by the DBHS staff as the Teacher of the Year for the 2013-2014 school year.  In her first year, she was named Rookie of the Year.  In 2010 she was nominated and earned a spot as a finalist for the Music Center’s Bravo Award.
As the new Activities Director, Janna is looking forward to carrying on the Brahma traditions that were such an important part of her high school experience.  She says, “I’m excited to be involved with supporting all the amazing programs we have here on this campus!”
---- Principal Catherine Real
Print