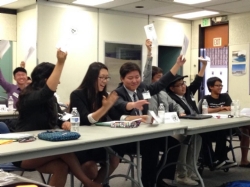 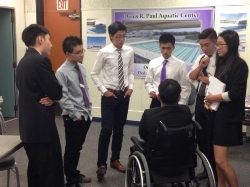 For many students, public speaking is a difficult task to accomplish, even more so when they must convince judges with a persuasive argument. However, for Debate club, this challenge has become a high school hobby.

A combination of Grand Crossfire Debate, Junior State of America Debate, and Model United Nations, Diamond Bar High School Debate exists to make better rhetoricians of DBHS students. These clubs merged together so that students do not have to join three different debate clubs. Although a merged club, each group in DBHS Debate participates in different competitions that pertain to its specific subject area.

For example, GXF Debate debates on broad topics, from controversial world events to those of national interest. In comparison, JSA Debate encourages people to take a greater interest in public debate and become better informed about important events around the world. Finally, in Model UN, the students perform the roles of national diplomats, using their knowledge of international law and their rhetorical prowess to advocate for laws beneficial to the nations that they represent.

“Debate helps in everyday life. It comes up in every aspect and you might not even know it,” Justin Chuang, co-president of GXF Debate, said. “In the round of everyday life, people can’t have such sophisticated discussions.”

Each member entering the competition must research and study a certain topic, preparing an argument and rebuttal against the opposing team. At the end of each round, the team that wins advances to compete for the final round against many competitors. At these events, members can also socialize and interact with students from schools all over the county.

“[Debate] opens up your mind and eyes on things you never thought that you would learn,” Annie Zhu, co-president of GXF Debate, said. “For me, debate was less of a competition and more of a socializing event. We were growing closer as a team and meeting competitors from other schools.”

Through their interactions with rivals, DBHS Debate students often gain insightful skill and information that they can use in future debates. Practicing and running scrimmages during team meets also help them improve and create stronger bonds between members.

“This is a really big part of my high school career,” Morgan Pak, a JSA Alliance Member, said. “I got to meet so many people; it helped me become a better speaker.”