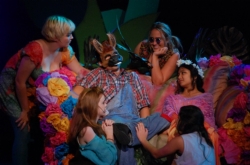 With the chilly winter breeze already knocking on the door, Diamond Bar High School Theatre Department’s annual fall play left me with such warmth that could only be felt on a dreamy, midsummer night.

Frankly, “A Midsummer Night’s Dream” has the potential to be terribly dull. After all, most high school students grow drowsy at the simple mention of anything even remotely related to William Shakespeare.

With that said, the production did not open with the bang I was hoping for, which appeared to confirm my distrust of school plays. However, my initial disappointment did not last long. The entrance of Demetrius and Lysander, played by junior Jonah Martinez and sophomore Riley Mawhorter respectively, is the saving grace of the show, and the production picks up from there.

“A Midsummer Night’s Dream” is a Shakespearean comedy which spins the tale of four young lovers who fall comically in and out of love over the course of a single, enchanted midsummer night. Taking a daring turn from the original play, the DBHS production is set in New York City and Woodstock, a music festival that represents hippie counterculture during the love-and-peace movement of the late 1960s. The tasteful costumes, colorful set and even the white roller skates of Helena, who is played by senior Katarina Avalos, capture the modern, groovy feel of the play extremely well.

Mawhorter truly stood out as Beverly Carlton in “The Man Who Came to Dinner,” last year’s fall play that I also thoroughly enjoyed, and his acting in “A Midsummer Night’s Dream” once again proves him as a fine actor.

However, his co-stars, Avalos and sophomore Chloe Reyes, are the leading stars of this production. Reyes, who plays Hermia, the beautiful lover of Lysander, is the diamond in the rough. Barely noticeable in her first production as Isabelle in “Pirates of Penzance”, Reyes returns onstage with a clear, strong voice and a wide range of emotions that captivates. The awestruck audience follows her every movement, down to the soft flutter of her hand.

On the other hand, Avalos is the cause of much of the audience’s laughter as she goes from chasing Demetrius while tripping at the same time in her roller skates to lamenting her sad state. Her portrayal of a modern, ditzy Helena is extremely well done.

The supporting roles are just as amazing as the leads. Senior Matthew Aquino, who portrays Nick Bottom, has the audience gasping with laughter at his priceless antics. His voice is enough to fill every little nook of the spacious theatre and from the very second he prances onstage to the very second he scampers off, it seems as if Aquino is the only performer onstage.

Furnished with splashy and vibrant decorations and excellent theatrics, this production, directed by drama director Beatrice Casagran is one that simply cannot be missed. The band that plays before, during and after the show is extremely talented and the dancing and singing at the end of the show is a nice touch. Never have I thought I would enjoy a high school production to this degree. So with that, bravo to all.