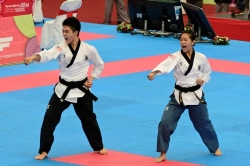 Only a handful of people will ever have the opportunity to be recognized around the globe, regardless of the feat. Although for most, competing at such a level just never be a daydream, junior Chris Lu has turned this dream into a reality.

Last month, Lu brought home the gold after competing against some of the top Taekwondo poomsae practitioners in the world as a part of Team USA in the ninth WTF (World Taekwondo Federation) World Poomsae Championships. The tournament was held from Oct. 30 to Nov. 2 in Aguascalientes, Mexico with 461 competitors from 46 different countries.

“It felt amazing to compete with world competitors and former world champions. Getting first place means that it was worth the effort; everything I put into Taekwondo was worth it, and I’m happy,” Lu said in a Facebook message.

After advancing from the state qualifier and placing first in nationals in July, Lu and nine other members from his studio qualified to represent the U.S. in the world championships. There, he placed fifth out of 16 countries in the junior pair division, which consists of one male and female pair, and first out of eight countries in team, which consists of groups of either three males or females. Team USA won four gold medals overall.

In the competing process, opposing participants of a certain division are usually assigned two forms, or poomsae, that they must perform. They are judged on power, focus, flexibility, ki-hap (yell, confidence), and stance. Although in most tournaments there are five judges in each ring, there were seven in the world championships. After a unit completes its respective form, each score is taken from the judges, the highest and lowest scores are discarded, and the average is taken between the remaining scores.

Before being selected into the 2014 U.S. National Poomsae Team, Lu first competed in nationals after receiving silver medals in the individuals and pair divisions at the Nevada State Championships in Las Vegas on March 1. At the 2014 USA Taekwondo National Championships, hosted in San Jose in July, he medaled gold in pair and team. There were over 3,800 competitors in nationals and 600 in the state qualifier. All medalists in the state qualifier were advanced to nationals, but only gold medalists went from nationals to world.

“In nationals, we were definitely hoping for world, but in the back of my mind I knew that was a best-case scenario. All we wanted was to medal, but we pulled through to world,” Lu said.

Currently a second degree black belt student at Just Taekwondo, Lu has been competing for nearly seven years. Lu devotes the majority of his time to Taekwondo and trains every other day with the aspiration of learning new techniques and becoming a top practitioner. Although he has been part of three different studios in his taekwondo career, his inspirations include the various instructors he has studied under.

“Taekwondo changed my life. I was taught discipline, respect, perseverance, and that’s basically how I carry out my life now,” Lu said.