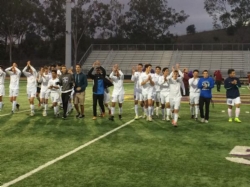 Bryan Becerra didn’t think he had timed it correctly, but his header in the waning moments proved to be all right.

Becerra’s goal off a corner kick proved to be the game-winner as Diamond Bar defeated Bloomington, 1-0, on Saturday night to capture the inaugural Champions Cup at Carter High School.

“Coach just told me to run toward the goalie and I didn’t expect to get the ball,” Becerra said. “When I hit it, I thought I was going to miss but it ended up going in. (Heck) yeah!”

In a game played without much rhythm or continuity, both teams scrambled for chances throughout.

Diamond Bar (5-1-1) didn’t produce a shot on goal until late in the game; Bloomington (4-2-0) had the only two shots on goal in the first half and attacked early in the second half,but managed just two long shots that were easily saved.

The final five minutes of the second half produced a flurry of chances, and Diamond Bar’s players ratcheted up the pressure until earning consecutive corner kicks in the final two minutes.

“(Bloomington) took us out of our game,” Diamond Bar coach Kemp Wells said. “We finally got some free kicks and corners (and) they were so worried about our tall guys that they let Becerra sneak in there and put in the net.”

Becerra was sprinting out of midfield to get on the end of a corner from Andre Gamboa, and the Brahmas managed the final 90 seconds to secure the victory.

“It was a close game. It could’ve gone either way but it looks like we wanted it a little bit more at the end,” Becerra said.

Diamond Bar qualified for the tournament after winning the Hacienda League last season, and defeated both Corona and Ontario last week to reach the final.

“Four games in a week that are playoff-caliber teams, it was tough for us,” said Wells, whose Brahmas started the season with a 1-0 loss to La Serna but are unbeaten since. Diamond Bar will compete in the new Palomares League beginning this season.

Bloomington qualified as the Sunkist League champion, and took three wins from its first three games — 1-0 over Redlands East Valley, 3-0 over Corona Centennial and 3-2 over San Gorgonio — in reaching the title game.