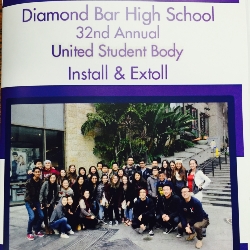 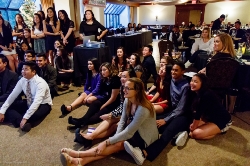 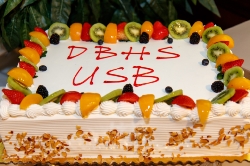 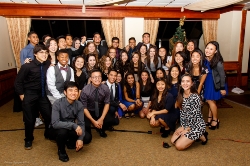 Sunday, December 14, 2014, our United Student Body Government students held their annual ceremony saying goodbye to this year's cabinet and welcoming next year's cabinet. The ceremony was held at the Meridian Club in Fullerton, CA.

As the saying goes, out with the old and in with the new, as the newly elected 2015 United Student Body commissioners prepare to take on their upcoming second semester.

The new commissioners have already come up with ideas to implement improvements for the upcoming year. For example, sophomore Commissioner of Advertising Jenny Son has made plans to expand USB’s range of influence and create new ways of spreading the word for future events.

“I want to make advertisement a bigger deal. Instead of just using the usual flyers and posters for announcing an upcoming event, we can sell simple cheap items like wristbands or t-shirts that get students more excited and pumped up for the upcoming events,” Son said.

Not only is the advertising department planning to improve its skills, but new junior Commissioner of Spirit Rebecca Wang is also seeking to improve participation in school activities such as clubs and dances. She would also like to increase support for certain sports that do not receive as much attention as the ever-popular football or basketball.

“Spirit involves school unity and promoting Brahma pride and by getting students to participate in these school activities or school sport matches, it shows support for each other and overall more pride for the school,” Wang said via Facebook.

Not all of the commissioners are new, such as junior Sabrina May, who formerly was the Commissioner of Spirit. Now, as Commissioner of Special Projects, she has set goals to improve both USB and the school as a whole. One plan to change the student’s attitude involves creating a better atmosphere.

“I think that the previous commissioners of special projects did an absolutely phenomenal job, and I will be doing my best to compete with how amazing everything went for them,” May stated via Facebook. “Although some students may think our lunchtime activities [are] futile, I believe that the kids there that are watching have a great time, like the car smash and homecoming activities.”

As the new commissioners prepare for their future roles, seniors such as Saakib Akbany, who was Commissioner of Academics, wrap up all of their work and prepare to retire from USB.

“There’s a sense of relief of finally being past the long hours and huge workload, sure. But for the most part, I’m feeling proud that I’m part of this group of amazing people that was able to successfully execute so many huge events for the school. It feels good to know that you made an impact on the school,” Akbany said via Facebook.