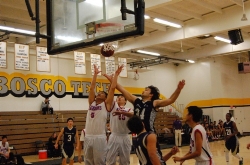 The Diamond Bar basketball team appears stronger, faster, and more athletic compared to DB teams in recent history due to the additions of four transfers. After a third place showing in the Bosco Tech tournament, the Brahmas have an overall record of 3-1.

Since the start of the preseason, the Brahmas have shown areas of weaknesses they will have to improve upon before the Palomeres League play starts.

“There are a lot of things that need to be cleaned up. It’s early in the season so we got some room and time to clean up. We have some lapses on the defensive end. Also, our guys need to be more comfortable with the ball,” head coach Henry Frierson said.

The team, which consists of eight players from last year’s, is deep with dynamic players capable of bringing an offensive spark off the bench.

“We are a deep team. It’s a coach’s best nightmare because it’s tough to get the guys in and a lot of these guys deserve playing time,” Frierson commented.

During the offseason, the Brahmas received four transfers who bring new styles to the program. Senior co-captain Tyler Ginyard, a transfer from Damien High School and known for his craftiness with the ball, will be the in charge of handling the point guard’s duties and leading the offense and defense. Another transfer is senior Brandon Rice from Servite. The 6’5 center, with a wide array of flashy post moves, gives the Brahmas an intimidating presence in the paint. Junior guard Lamar Johnson brings his lights-out shooting ability from Upland High School. The youngest of all the transfers is sophomore Malik Corey. Corey, a transfer from Diamond Ranch, brings his quickness and youth to the program.

“All the transfers bring something different and all of them have played a lot basketball. The biggest credit to them is how they were able to gel with the rest of the team. Building chemistry is usually tough for transfers and their new teammates. However, in addition, their ball skill is definitely something they bring to the team,” Frierson stated.

Last year, the Brahmas finished in the second place in the Hacienda League. However, this year will be a lot tougher to reach that mark because the team has to face powerhouse teams like Glendora and Claremont twice this season.

“The goal, every year, is to win league and it’s nothing different this year. We are going to be working towards that this year,” Frierson said.