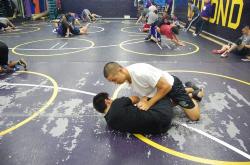 After going 4-1 in the Hacienda league last year, with just a loss to Rowland High School, the Diamond Bar’s varsity boys wrestling team is motivated to claim the league title in the Palomares League this season. Last week, DB competed in the Carter Tournament where they finished in 11th place.

“Overall good year but did not finish as strong in CIF. They have a lot more potential than what they showed, but we [finished] fourth in CIF, which is the best in the area,” coach Donny Palmer Sr. said.

With six returning CIF-SS players who have placed higher in the CIF playoff last year, seniors Donny Palmer Jr., Jesse Dicken, Derrick Moss, Jeffrey Lin, and juniors Leighlan Corpus, and Ian Campbell, the team will have an advantage against the other teams in the league in experience.

Moss and Palmer Jr. will be essential to the team, considering the fact that they have both gained the 30-win club title, a title giving to wrestlers who win 30 matches in one season. Palmer Jr., who wrestled at the Junior Nationals last year, will be going for his third consecutive 30-win club this season.

Although DB has many returning players, the varsity team has some empty spots in a couple weight classes it needs to fill. These empty spots will need to be covered before the league starts to prevent forfeits.

To succeed last year, coach Palmer will be pushing his wrestlers to their limit on the weekdays and sometimes even on the weekends. Typically, the team practices drills for an hour to 90 minutes at the beginning of each practice. After, they will wrestle with a partner for 90 minutes and finish practice with conditioning workouts for a 30 minutes.

“[I want to get them] mentally and physically ready and also help them learn the techniques and strategies. We will also train them as hard as we can,” Palmer said.

Last year, for the first time ever, DB sent former senior KeAndre Johnson to the National High School Coaches Association Senior Nationals after he placed within the top 12 in State.

In the Carter Tournament that took place last week, the Brahmas took 11th place out of over 60 teams. Dickens, Moss, Campbell, and junior Ryan Melendez were the only four that placed in the tournament from DB. Dickens finished in seventh, Moss and Campbell sixth, and Melendez in fourth.

Today, the Brahmas will be having their first league game against Walnut at home. This weekend, DB will also be competing in the Mater Dei Tournament.