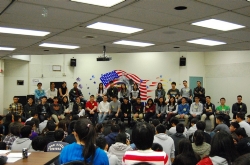 Though high school students are thoroughly prepped to be admitted into colleges, they are rarely informed on what to expect after graduation. Luckily, Diamond Bar High School alumni shared their college experiences to current Brahmas during a calculus guest speaker event on Jan. 7.

Calculus and higher level math teacher Howard Alcosser hosted the event, which invited many past students who are currently attending Ivy League schools and other distinguished universities from around the country. Students currently in the calculus program attended and were encouraged to ask questions in an effort to create a better understanding of life after high school.

“The purpose of the event, when I started doing this 30 years ago, is the same as the purpose now. The main reason is so that the students, here at Diamond Bar, can get an idea of what college is like from a student’s point of view,” Alcosser said.

The math teacher also stated that another goal of the event is to “keep the legacy of Diamond Bar High School alive.” He believes that past students enjoy returning to their high school to visit old friends or even see previous teachers.

The alumni had a chance to speak during each calculus class period. Current students had less than an hour to listen while the alumni shared their thoughts about their respective colleges. Topics ranging from financial aid to social life were covered as well.

Among the speakers was Emily Kuo, who was part of Berkeley’s spring admit program. Kuo is now a junior at the school, majoring in English and Gender and Woman Studies. This means that she was not able to attend the school until the spring semester her first year, but now that she looks back, she says that it didn’t make any difference. Stanley Liu, another spring admit who graduated just last year, has now gone to Northern California and is preparing to begin his first semester at Berkeley. Daniel Kim, a 2013 alumni now studying accounting at USC, advises current students to keep an open mind and know what you like and dislike. For himself, he loved math in high school, pursuing math competitions, but quickly found that he disliked physics. As a result, he decided upon accounting as his major, saying that college is the time to explore.

The math teacher invited all his former students via email around winter break to attend the event and encouraged them to come and speak.

This tradition began about 30 years ago with the Gifted and Talented Education program. At the time, the dean of the math department was also the head of the program at Diamond Bar. Thus, Alcosser, being in the math department as well, was able to help the dean plan and lead the event. However, when the GATE program was removed, Alcosser decided to continue the program.

For the future, Alcosser doesn’t see the event ending any time soon and hopes to continue the event in order to improve students’ perspectives on college.

“I hope that the students who are listening get a better idea of what college life is like. They can be exposed to different colleges,” Alcosser said, “[I also hope that] the students coming back can continue to have warm feelings toward Diamond Bar High School.”