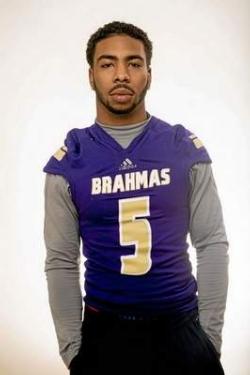 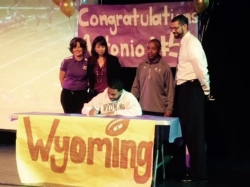 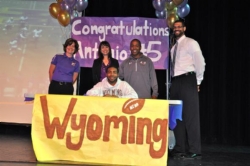 The decision was easy for Diamond Bar High School football player Antonio “Noodles” Hull. The road getting there was not.

Hull, like a select group of other local football standouts, will partake in national signing day festivities for football recruits on Wednesday. He will sign with Wyoming marking the end of a long and tumultuous journey to reach his goal of playing at the next level.

Hull lost all but one game of his junior season after being declared ineligible by CIF for what was ruled to be a athletically motivated transfer from West Covina, where Hull played the first two years of his prep career, to Diamond Bar.

Most recruiting experts believe a prospect’s junior season is his most important. It allows for a player to get on the radar of college recruiters and for them to monitor the player his senior season. Hull never got that chance and hurt him in two ways.

Hull had a fine senior season, with 1,278 yards rushing and 12 touchdowns. He also shined returning kicks and recorded 38 tackles on defense. It was enough to garner interest from Hawaii, Nevada, UNLV and Washington. He believes UNLV and Nevada were prepared to offer, but backed off once he gave a verbal commit to Wyoming following an official visit.

“I signed with Wyoming and I didn’t want to hear from any other coaches,” said Hull, who will play defensive back and return kicks for the Cowboys. “I committed. I’m super excited. I can’t say it was all me. I had coaches who kept pushing the recruiters and assuring them I’d be okay in the classroom.

Harvard will get a pair of Valley standouts. San Marino receiver/defensive back Tyler Spitzer, who missed his senior season with a knee injury will join the Crimson along with Bishop Amat linebacker Anthony Camargo.

It was an unusually good year for area linemen. Glendora’s Ben Northup picked Hawaii way back during the 2014 season and appears ready to keep that commitment. West Covina’s Eric Quevedo is expected to make it official with Boise St. And Duarte’s Angel Villanueva looks on his way to Montana.