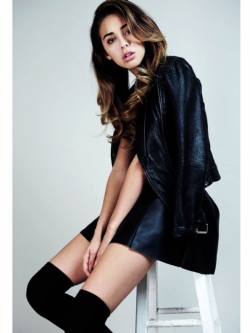 When high school graduation hits, a period of both excitement and uncertainty begins for most students, the start of a long process in discovering a future career. However, Class of 2013 alumna Nadia Mejia quickly rose to stardom both as a TV personality and model soon after she stepped out of the doors of Diamond Bar High School.

Her father, Gerado Mejia, a musician who had a hit song, “Rico Suave,” in 1990, now works behind the scenes in the music industry in the artists and repertoires division at Interscope Records.

Two years ago, the Mejia family participated on the reality show “Celebrity Wife Swap,” and a few months later, a production company contacted their family about doing a reality show. They all agreed and filmed a ten minute sizzle reel to give networks a taste of their family. The Mejia’s received offers from MTV, A&E, and VH1, and ultimately decided to go with VH1. They began filming “Suave Says” for the next seven months with the show finally premiering last month.

This past year, a trip to Huntington Beach for the 2013 U.S. Open of Surfing proved to be a very lucky day for Mejia, 17 years old at the time. As she was walking on the beach with her friends, she was scouted by Next Model Management, an agency known for signing the winner of “America’s Next Top Model.” This seemed to her like a scam until they emailed her the next day telling her to come to the agency. One week later, she was signed to be a part of NEXT.

“I know this sounds corny, but the minute I stepped in front of the camera while I was on my first test shoot, I knew that modeling was what I wanted to pursue until people told me I was too old and wrinkly to do it anymore,” Mejia said via email.

Before her modeling career began, she was a student at DBHS taking classes like anyone else her age. She attributes much of her success to the positive experience she had in high school, namely with some of her favorite teachers.

“I had continuous support from my teachers to follow my dreams and whom have still continued to support me on my journey even after I graduated. Mrs. DeCambra, Ms. Burns, Mr. Galeener, Mr. Harderson, Mr. Wells, Mr. Brummett, and even my favorite grumpy old man, Mr. Zylstra, all made my high school experience so wonderful,” Mejia said.

In her modeling career, Mejia has had the opportunity to work with clothing stores such as PacSun, Tilly’s, and Swell and has even modeled in a winter campaign for Reef.
One of the highlights of her career was working with Raf Simmons and one of the designers of Christian Dior as their fit model.

“They basically used me as a human mannequin and created their new collaborative line on my body. To be around such iconic people in the fashion industry felt like a dream come true and to watch them in their creative process while using me as a vision of their line was the icing on top of the cake,” Mejia said.

Currently, she is in the process of recording her first EP with Red One, a music producer who has worked with Enrique Iglesias, Lady Gaga, Jennifer Lopez, Jason Derulo, and many more. As for acting, she feels she is much better at being herself than trying to play someone else, but she is open to what the future holds.

Mejia’s faith is a very important aspect of her life, and she holds an active part in her church in Los Angeles as a worship leader every Sunday and Thursday.

“I would be nothing without God by my side,” Mejia said.

Though modeling has allowed Mejia many great opportunities, the misconception that girls need to look a certain way to fit a certain job description led her develop an eating disorder for a period of time.

“Now that I am healthy and happy, looking back on that dark time has made me stronger than I was before, and I have learned to love my body and embrace the way God created me and to never let anyone’s opinions bring me down. You’ll never please everybody, don’t hurt yourself trying,” Mejia stated.

Now that she has overcome her eating disorder, one of her hobbies is cooking. To pursue this hobby, she is taking online classes to receive a degree in restaurant management and would love to open up her own restaurant one day.

“As I travel with modeling, I am going to take cooking classes so that I am able to learn and be inspired by each culture’s diversity when it comes to their cuisines,” Mejia said. “I give all of the glory to God for these continuous blessings and can’t wait to see what my future holds,” Mejia said.