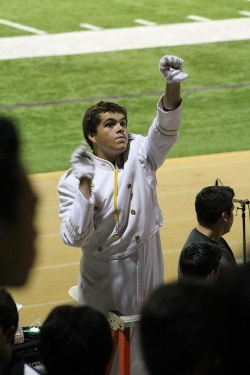 If you have attended a Diamond Bar football game this past year, chances are, you’ve noticed Miles Ocon. However, he isn’t in a helmet tackling other players. Instead, Ocon is marching out onto the field and conducting the band during the half-time show.

As a Drum Major for the Diamond Bar Marching Band, the Thundering Herd, Ocon is the center of attention at football games and during competitions.

Ocon, front and center, conducts the band through the lively pep songs and half-time performances that pump up the crowd during the football season. A drum major’s duties also include leading the Thundering Herd at parades and during competitions, such as the recent Arcadia Review, where the band received top honors.

“The position that I’m in gives me a lot of experience for the future, like in building leadership skills and dealing with situations…like figuring out the best way to get through them.” Ocon said.

Ocon is not only skilled at conducting; he has been playing the saxophone since fourth grade.

“What I love most about band is being around people who really care about making music and making memories as well.” Ocon said.

During his freshman year, Ocon joined the band to continue his hobby of playing the saxophone.

Later on, band director Steve Acciani came up to him during class and made the suggestion that would lead him to eventually becoming a Drum Major. Following an audition that tested his baton spinning and other skills, Ocon received the position and has been conducting the band ever since.

“Miles is one of the best leaders we have ever had with the band. We knew from the first day that he stepped into the room as a freshman that the he had the confidence and charisma to become something special,” Acciani said.

Despite being a busy junior with two AP classes, Ocon is also involved in a group within the band department called the Quarter Masters, which keeps him busy during the marching season. When the band is asked to play at events, such as the Disney Star Wars Half Marathon, Ocon and the Quarter Masters unload the equipment and instruments, and set up along the route.

“We may not remember what symphony we played our freshman year, but we will remember the wonderful memories that we had with the people closest to us.” Ocon said about himself and his bandmates.