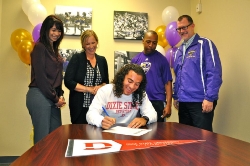 It’s official – Brahma Isaiah Thompson has committed to Dixie State University.
The 17-year-old Diamond Bar High senior signed a national letter of intent to play for the Red Storm football program in St. George, Utah.
"It’s a great feeling,” Thomson said a signing ceremony with family members and school officials on March 9.
The talented strong kick and wingback earned his spot as a starter on the Brahma varsity team as a sophomore.
“A lot of people don’t realize that for a school this size, it’s a pretty big deal, “ said Head Football Coach Marcus Hughes.
Coach Joe Beaudion recalled when he noticed Thompson during the first couple practices.
“I said, “Who’s that kid out there? He moves real well. He’s real shifty!’”
Thompson believes his speed and toughness gained the attention of college recruiters.
“I like to hit. I make plays.  That’s what I do.”
The teen is already impressed with Dixie State.
“It’s a great school and a bunch of great coaches and players. I’m just excited to get working over there.”
The Brahma coaches advised the football player to maintain his successful work ethic and drive.
“Thompson has a drive that carried him on. So, keep that with you,” Beaudion stated.
“You are a special athlete. Just keep working hard. I think you can do well!” Hughes added.
Print