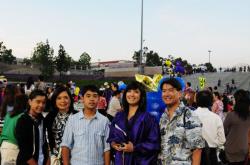 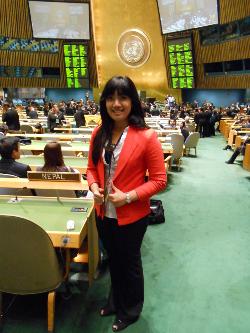 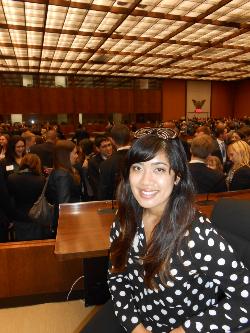 A lot can happen in five years. Since graduating from Diamond Bar High School in 2010, Kassandra Taira has been working non-stop to achieve her goals.

When Kassandra first thought of her future, she had a vague idea of pursuing a career in the fashion industry. Thanks to influential educators at DBHS, her academic interests expanded to include the topic of international relations and American politics. She references teachers Christine Buccola, Beverly Pollard, Sue Benner, Emily Clark, and Denise Mesdjian as key inspiration for her future career path. Kassandra went on to major in Business Administration at UC Riverside with a minor in Political Science. In addition to her studies with UCR’s Honors program, she continued pursuing her interests from high school by participating and competing for UCR’s chapter of Model United Nations, serving as a Spanish tutor for the Hispanic Studies Department and as a Student Ambassador of UCR’s School of Business.

To supplement her degree in business and to acquire international work experience, Kassandra sought additional opportunities: she completed internships in the treasury department at Philippine National Bank in Manila, Philippines, and in the Department of State headquarters in Washington D.C. In these roles, Kassandra put every facet of her education to practical use. Most notably while at the Department of State, she drafted official correspondence to foreign dignitaries on behalf of President Obama and Secretary of State John Kerry. The language skills and knowledge of history and politics gained at DBHS and UCR were instrumental in ensuring Kassandra’s meaningful contributions to each of those offices.

In the last year and a half Kassandra’s hard work has begun to pay off. After graduating cum laude from UC Riverside in 2014, Kassandra moved to Washington D.C. to work as an intern in the office of Congressman Ed Royce. In this role, she sharpened her understanding of the inner workings of Congress and the House of Representatives. Not only is Royce the representative for California’s 39th congressional district which Diamond Bar belongs to, but he is also the chairman of the House Committee on Foreign Affairs. Kassandra therefore had the opportunity to actively participate in congressional research on several hot-button foreign policy issues. This experience in turn led to her first job after college with the office of Congressman Paul Cook, where she is now Staff Assistant and Scheduler. Since Congressman Cook represents the California high desert communities and serves on the House Committees on Foreign Affairs, Armed Services, and Natural Resources, Kassandra finds her office a wonderfully diverse work environment.

It’s been a long, at-times bumpy road since graduating from DBHS, and Kassandra is eternally grateful to have come from an institution that takes such a holistic view on education. The teachers and her exemplary peers continually challenged her to aspire to achieve more. She hopes to attend graduate school and eventually become a Foreign Service officer—a diplomat—at the Department of State.