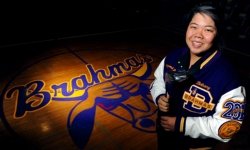 Senior Bethany Wu is making one last impression to her remarkable high school career. Before she heads off to UCLA for golf, Wu was invited to compete in the All Nippon Airways Inspiration Golf Tournament from March 30 to April 5 at the Mission Hills Country Club in Rancho Mirage.

“I was so shocked at the invite that I had to read the email twice just to make sure it was real. For a few weeks before [the invite], my family and I were wondering who would get the invites, and we were just hoping that maybe I would get one,” Wu commentedThe ANA Inspiration is one of the five major championships on the LPGA tour.

“My advice was just to have fun and learn from this experience because these sponsor exemptions (the invites) are really rare, especially for an LPGA ‘major’,” Wu said.

Wu, the 4th ranked high school player in the nation according to Golfsweek, has a high school golf resume that is incomparable to others. The senior became the league MVP for the fourth consecutive year and helped the team win the 2014 CIF State Championship. Wu also led the Lady Brahmas to its first Knabe Cup Tournament win and helped DB capture the CIF Central Division Championship for the third straight year. The UCLA commit became the first player to win the ANNIKA Invitational Tournament in consecutive years.

Wu has not competed since the State Championship and is starting to change up her practice routine for the LPGA event.

“Yeah, I’m practicing a bit differently now. I was not going to have another tournament until the end of May so I am not as focused as I should be for prepping for a tournament. I’m trying not to think how I’ll finish. I just want to do the best I can and if I make the cut after two days, then it’ll be a great way to start spring break,” Wu said.