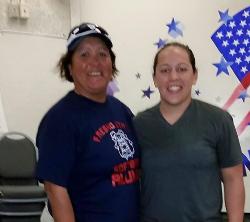 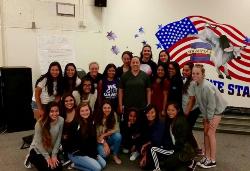 Special Thank You to former Brahma Rachel Folden for coming back to Diamond Bar High School to share her softball story with our brahma softball program. Everyone enjoyed her visit. She graduated from Diamond Bar High School where she had a standout career and had her jersey retired.  Folden graduated from Marshall University with a bachelor's degree in History, where she was also an Academic All-American and was on the Dean's List each semester.

Rachel Folden is a former professional softball player for the Carolina Diamonds in the NPF (National Pro Fastpitch). Folden recently retired after the 2012 season, after 5 years in the NPF. Folden played for two professional teams, the Diamonds in 2012, and the Chicago Bandits from 2008-2012. She finished her career ranked 2nd all time in NPF history in home runs (41), 3rd in RBI (122), 6th in walks (101), and T-8th in doubles (28).

Prior to her stint at Carolina, Folden played for the Chicago Bandits for 4 seasons, where she was a 3-time All-NPF catcher, 2008 Rookie of the Year, 2011 Offensive Player of the Year, and 2011 Home Run Champion (league leader in home runs). Folden also won 2 NPF championships with the Bandits in 2008 and 2011.

Recently, Folden was an Assistant Coach in charge of pitching, catching, and outfield at Valparaiso University in Valparaiso, IN. While at Valpo, she helped the team to its best season in program history, Valpo had numerous all-conference performers and one of the lowest ERA's in team history in Folden's two years of tenure.

Prior to coaching at Valparaiso, Folden was a graduate assistant coach at Holy Names University in Oakland, CA. In her one year at HNU, Folden helped the team to a Cal-Pac championship in only its second year of existence. HNU also had the Cal-Pac Pitcher of the Year, Player of the Year, Rookie of the Year, and Coaching Staff of the Year during Folden's tenure.

Folden was also the head coach at Encinal High School in Alameda, CA in 2009. She helped turn a program around that previously finished with a total of 4 wins. She guided an Encinal team that finished fourth in the Bay Shore League with 15 wins, 9 of those coming during league play.

Rachel Folden is originally from Azusa, CA and currently resides and trains in Valparaiso, IN, where she gives individual and team fastpitch instruction, hosts numerous camps and clinics, and provides analysis and college recruiting information for young women of all ages.