"Into the Woods" Coming To The DBHS Theater 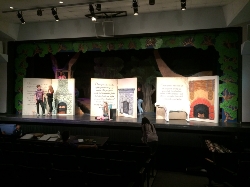 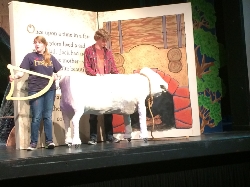 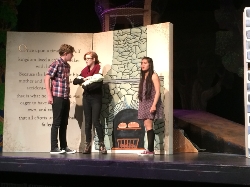 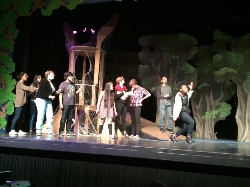 "Into the Woods," a musical with book by James Lapine and music and lyrics by Stephen Sondheim, takes a grown up twist on several Brothers Grimm fairy tales, including Red Riding Hood, Cinderella, and Rapunzel, intertwining the plots of several stories with the original story about a baker and his wife, their wish to begin a family and their interaction with the witch who has put a curse on them. The plot depicts consequences of the characters' wishes and actions.

“My favorite part of the production is definitely the musical score. The music is so fun and catchy, and I’m having a lot of fun working with the cast to perfect it,” said DBHS student Will Nazareno, who not only plays the role of Rapunzel’s Prince but is also Assistant Music Director.

As is the practice in the DBHS theater program, students involved with the musical, take a production class and work as a company on every element of production including production management, acting, stage-craft, set design, makeup design, publicity, fundraising, house management, box office, concessions and music. The musical features live music played by DBHS’ Grammy Award winning orchestra conducted by Mr. Steve Acciani. The visually stunning set was designed through collaboration between staff and DBHS Theatre Performing Arts Academy students. The idea of using books to represent each story came from a set design project by Senior Marissa Kummerman and the basic lay out and idea to use trees for all the structural set elements came from a design by Senior Emily Beard who also designed and built Milky White, the prominently feature cow in the show. “The aim of the program is to give students real world experiences and skills that will give them a really strong base for college and career,” said Beatrice Casagran, DBHS Theatre Arts teacher.

“I’m very excited to be a part of this production. We’ve been putting in a lot of work to make it great, and I can’t wait to put it on for an audience,” said Amelia Anijielo, who is playing the Witch. Though only a freshman, Anijielo has been wowing those who experience her strong, warm mezzo voice and magnetic stage presence. She recently won an award for her acting at the Fullerton High School Theater Festival as part of the DBHS team.

Tickets may be purchased online at www.seatyourself.biz/dbhsdrama or at the door. Ticket prices vary depending on seating section, starting at $12 for students and $15 for adults. The Diamond Bar High School Theater is on 21400 E. Pathfinder Road in Diamond Bar, CA.