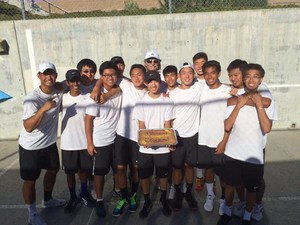 It might be the best chance for the Arcadia and Diamond Bar high school boys tennis programs to prove their prowess in a long time.

But both those teams have graduated to Division 1, probably the toughest 32-team team high school tournament in the nation. The Pacific League dropped down a division in the reshuffle and the undefeated Apaches earned the No. 2 seed in the Division 2 playoffs and will play host to Righetti in Wednesday’s first round. The Brahmas won the inaugural Palomares League crown and will play host to Hart. Diamond Bar earned the No. 6 slot in the tournament. Arcadia has never won a team title while Diamond Bar won a title in 2008.

San Marino, which defeated Palm Desert in the Division 2 final the last two years, earned the No. 5 seed in Division 1. The Titans will play La Quinta in the opening round.

Keppel, Maranatha and Rosemead all earned high seeds in the tournaments. Keppel is the No. 3 seed and Maranatha the No. 4 seed in Division 4. The Aztecs will play host to the winner of the Orcutt Academy-Cerritos Valley Christian match. Maranatha will play the winner of the Alhambra-Lompoc match. Rowland is the No. 5 seed and will play either Ocean View or Oakwood. Rosemead earned the No. 4 seed in Division 5 and will play the Downey-Ganesha winner.

Twenty-eight San Gabriel Valley and Whittier-area teams earned playoff berths. All tournament finals will be held May 22 at The Claremont Club.

Other area teams will play wild-card games on Tuesday, with Schurr playing host to Yucaipa and Azusa taking on visiting San Jacinto.