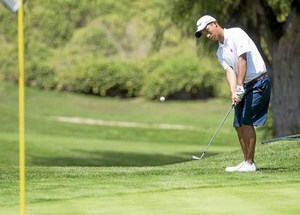 Jefferson Kao is playing every golf tournament like it his last.

Maybe because it is.

“Every tournament I play right now is my last junior tournament ever,” the Diamond Bar High School senior said. “It’s really hitting me hard because when you’re kind of young at every tournament you do not do well, you always say there is the next one.

“Well there is no more next ones. This is the next one.”

The UC Irvine-bound player shot an even-par 72 on Riverside’s 6,517-yard Victoria Golf Club in the CIF Southern Section Central Division tournament on Monday. Kao and teammate Brian Hsu advanced to the CIF-SS individual finals on May 21 at Mission Lakes Country Club in Desert Hot Springs. Hsu shot a 2-over 74 to earn one of the top spots. San Dimas’ Hisham Hussein missed out on advancing on the first extra hole when a shot landed in the lake along the par-4 first hole. He finished with a 3-over 75.

Kao finished tied for fifth place. Junior Tim Davis of Great Oak won the event with 3-under 69 with a birdie on the first playoff hole, the par-4 No. 10. Arrowhead Christian’s Sean Yu was second and Murrieta Valley’s Kyle Bachelor was third. All shot 69s. Norman Xiong had a hole-in-one on the par-3 199-yard fifth hole to finish fourth at 70.

Kao had an eagle on the par-5 486-yard 14th hole and three birdies. He had five bogeys.

“My drives were pretty straight and my putting saved me a lot,” Kao said. “My bogeys were because I did not chip close enough.”

PHOTO: Diamond Bar's Jefferson Kao chips onto the 18th green during the CIF-SS golf individual tournament at the Victoria Country Club in Riverside on Monday May 11, 2015. (Photo by Keith Durflinger/San Gabriel Valley Tribune)