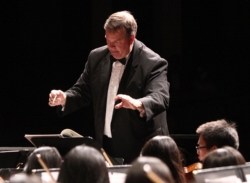 After winning $1,000 as a finalist for the Educator Award presented by The Recording Academy and Grammy Foundation, Diamond Bar High School teacher Steven Acciani gave it back.

Acciani, who lives in Chino Hills with his family, was presented with $1,000 honorariums by Grammy Foundation vice president Scott Goldman at a May 18 ceremony at the school. But he is no stranger to awards. The 50-year-old was named Diamond Bar’s Teacher of the Year for the 2012-2013 school year and was instrumental in helping his high school receive a National Grammy Signature School award last year.

That’s why handing over the check to the high school program was an easy decision.

“Our community is very generous. In my 26 years of teaching, we haven’t had to turn a kid down,” said the Walnut Valley Unified School District loyal. “Private coaches give free lessons to students who can’t afford it. If a student has inadequate instruments, we find ways to raise money. ... That’s why I donated the $1,000 back to the program. The community has done so much for me, I shouldn’t benefit from it.”

Acciani’s honorarium is in addition to the $1,000 grant bestowed to Diamond Bar High School by academy and foundation.

Grammy Foundation executive education director David Sears, who described Acciani as an “enthusiastic educator,” was one of the people who presented the check to Acciani.

“We think it’s pretty cool to be able to recognize a teacher as one of 10 finalists of 7,000 applicants for the Educator Award,” Sears said. “It’s a pretty significant process to get to that level.”

Former Diamond Bar High School student and marching band player Miso Kwak said she wrote down phrases from Acciani including “You don’t need to win, but you have to feel like you gave your best” and continue to use them to motivate and inspire herself and others now that she’s at UCLA.

“He was always a person I could talk to when I was stressed out about music, school, anything really,” said 20-year-old Kwak. “He could always make me come out of his office smiling and laughing. He always tells us to make the lives of people around you better. I think he does that for all of us.”

While Kwak is not majoring in music, her experience in Diamond Bar High School’s music program still resonates.

“I play flute in college as an extracurricular activity. That shows how positive of an influence Mr. Acciani was,” she said.

When students first start in Acciani’s program, he said he wants them to get a basic feel for their instrumental and how to control it instead of trying to play a piece perfectly.

“It’s better to create something than to just be perfect,” Acciani said. “The way I look at it is, you can force someone to be good or you can inspire them to be great.”