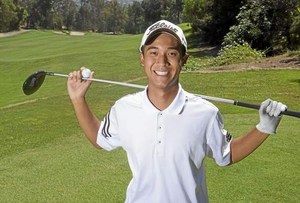 It’s not very good practice for golfers to play as if there is no tomorrow. It can lead to haphazard play with mixed results.

Don’t tell that to Jefferson Kao of Diamond Bar High School. In the season-ending tournaments, he played that way with a lot of success, advancing to the CIF State tournament and earning Player of the Year honors.

The senior, who will play at UC Irvine next year, won the Palomares League individual title for the first time.

The Brahmas had 2014 Player of the Year Sahith Theegala back for the team playoffs and Diamond Bar just missed advancing to the CIF Southern Section all-division finals, finishing in third place in the Eastern Division team tournament at Los Serranos Country Club, four strokes from a qualifying position.

Kao and most of his teammates did not have the best of tournaments on that day, but Kao made up for it the rest of the season. He tied for seventh place in the Eastern Division individual tournament at Victoria Golf Club in Riverside with an even-par 72, then survived the crazy winds in Desert Hot Springs to finish tied for 18th overall at Mission Lakes Country Club in the CIF-SS/SCGA all-division finals and then managed to overcome an unsettling finishing in the CIF State/SCGA Southern California qualifier at Brookside Golf Course to advance to state. Kao tied for 10th with an even-par 72 at Brookside after going 3-over-par on his final three holes.

At the State tournament at Poppy Hills in Pebble Beach he shot a 6-over-par 77, a bunker shot in the early going undoing a big finish.

“It definitely feels great,” he said of his finish to the season. “This year is a great memory. I grew up with these people playing golf and it is my last time to play with these guys before all of us are heading on our separate ways to college.”

Tony McCabe had a big school year coaching the Diamond Bar High School golf teams. The girls won their first CIF State tournament. The Brahmas boys did not quite get that far, but they had a brilliant season.

McCabe, coaching the boys varsity team for the first time, helped Diamond Bar to third place in the CIF Southern Section Eastern Division finals, missing a third consecutive return to the CIF-SS all-division finals. He is the Coach of the Year.

McCabe was able to continue coach for the season though for another 2 ½ weeks. Senior Jefferson Kao advanced to the CIF State tournament.