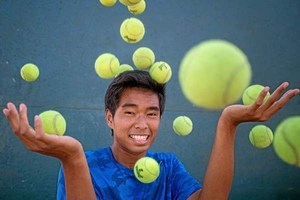 Neil Tengbumroong’s 2015 high school tennis season finished with a bang, so the Diamond Bar High School sophomore expects a lot more will be in store for his junior season.

Tengbumroong finished the season one match from advancing to the CIF-SS’s individual tournament main draw. He lost to San Marino’s Danny Gealer, one of the top seniors in the section, 6-1, 6-4, in the regional finals. If he had knocked off the UCLA-bound player, Tengbumroong would have likely played in a Round of 16 play-in game to make the final 16 draw at the Seal Beach Tennis Center.

He was the lone east San Gabriel Valley player to get to the regional final, earning him tennis Player of the Year honors.

“I did not expect to get to the third round,” he said. “I remember last year every draw was tough and there were all these players in grades all above me. I think now that I’ve been through this a couple of times, I have a better chance of getting to the main draw next time.”

Tengbumroong lost in the second round of the individual tournament last year.

He helped the Brahmas (16-3) to the inaugural Palomares League title and the CIF-SS Division 2 quarterfinals this season, falling to eventual division runner-up San Clemente. That was the final match for Diamond Bar coach Dave Hamel, who retired from teaching and coaching after 39 years, the last 16 at Diamond Bar.

“I have never had a guy work as hard,” Hamel said. “After practice he goes and hits with a touring pro from Germany and on weekends he is always in a tournament somewhere.

“The thing I love about him is his great attitude. He understands tennis is a huge part of his world but not the whole world. He has a good balance between competition and what is really important.”

Tengbumroong started off the season by handing Claremont junior Andrew Leahy his only defeat of the season in team competition, but Leahy came back to win the second match and then took the league individual tournament title, 6-2, 6-1.