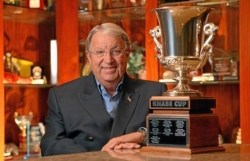 Diamond Bar won the championship cup in 2014 by two strokes over Mira Costa. This year the Brahmas won the cup by one stroke on the spectacular play of senior captain Josephine Chang. Josephine shot a 5 under par 69 but took second to nationally ranked player Andrea Lee who shot a 6 under.

Kailie Vongsaga continued her stellar play shooting two under 72 and sophomore Crystal Wang shot par to help the Brahmas win back to back Knabe Cups.