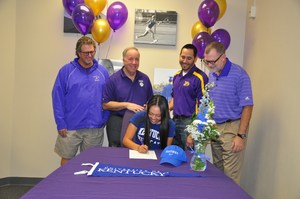 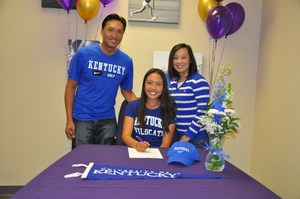 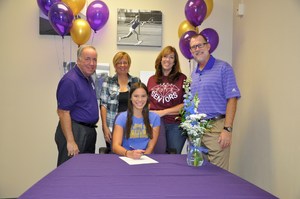 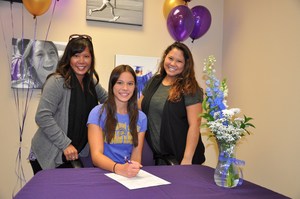 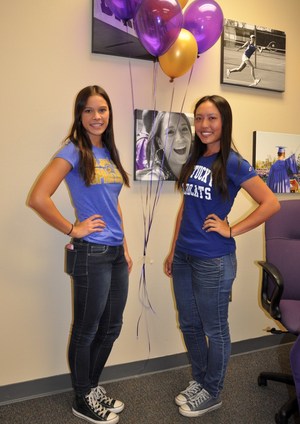 Diamond Bar High School (DBHS) golfer Josephine Chang and swimmer Jenna Lloyd will be taking their skills to compete at the collegiate level after signing national letters of intent on November 13.

Chang, 17, will attend University of Kentucky in the fall on a coveted full-ride scholarship.

Louisville coaches contacted the teen last summer and came to watch her play in an East Coast tournament.

That same week, she visited the college to meet the athletic department staff and check out the indoor facilities and university-owned golf course.  It was love at first sight.

“It was everything I possibly needed to pursue golfer further,” she said during the signing ceremony with school officials and families.

“The coaches genuinely want me and made me feel welcome. And it’s beautiful and green and the trees change colors,” she added.

Chang began playing golf for fun with her big sister and cousins at age 7.

In fifth grade, she met two coaches who introduced her to the world of competitive golf. She soon began playing junior tournaments.

“They helped shape me into the golfer I am today,” she said.

Chang has golfed all four years on the DBHS varsity team that has won three CIF Championships, one Runner-Up CIF, and two CIF State Runner-Up awards.

“It was an amazing feeling when we came in and realized that we finally achieved the goal we’d been chasing since freshman year,” she said.

This year, Chang advanced to the State Semi-Finals as an individual player.

The sprinter’s favorite race is the 100-meter breaststroke and her best time is an impressive 1 minute, 3 seconds.

“I’ve been swimming ever since I was little, about 4 years old,” she said.

Lloyd made a competitive national team in the eighth grade and has qualified for a national contest.

She now competes at the junior national level, which is just two levels below the Olympic trials level.

This is Lloyd’s fourth year on the school’s varsity swim team.

“I love the new pool,” she says about the aquatic center that was dedicated in December 2013.

“It’s a beautiful facility, compared to other schools.”

Prior to the opening, DBHS teams practiced and competed at Walnut High.

“Having home meets gives us a boost during competitions,” she added.

Lloyd plans to study communication disorders to pursue a career as a speech therapist.