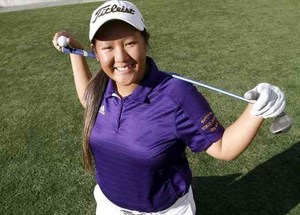 Picture by JAMES CARBONE for the San Bernardino Sun

When even the best players lose more tournaments than they win, the nature of golf makes it difficult to define a player’s ability.

Adding one more element to that predicament for Diamond Bar High School’s Kailie Vongsaga was the fact that 2015 was her first season in high school. Combining the Brahmas’ school schedule with her independent tournament tours, not to mention a new team dynamic she wasn’t accustomed to, there were several new factors effecting her play.

Weighing her rankings from different sources and what he witnessed in person during Vongsaga’s debut season for the Brahmas, Diamond Bar coach Tony McCabe came to a conclusion at which he could not have easily arrived.

“As far as freshmen go, she was probably one of the best in the world,” McCabe said. “You look at her rankings and caliber of the competition, of all ages, what she did this year was special.”

It all added up to Vongsaga earning the Player of the Year honors from the Daily Bulletin.

Winning the Palomares League MVP a couple months shy of her 15th birthday, Vongsaga shot 5-under par on the opening day of league finals and cruised to a 10-stroke victory.

She beat the best players in Southern California, freshmen through seniors, with a 3-under-par 68 to win the CIF-SS Southern Invitational Regional on Oct. 26.

Individual feats aside, the largest adjustment for Vongsaga was having teammates depend on her. She certainly didn’t play like she was feeling any sort of a burden.

Vongsaga’s 70 tied for the best score of the day as Diamond Bar tied eventual state champion Mira Costa with a total of 395 in the Central Division Team championship Nov. 2.

In the first tournament of her high school experience earlier in the season, Vongsaga led Diamond Bar to a victory over Mira Costa for the prestigious Knabe Cup.

At the time she wasn’t sure which was better, the Tiffany & Co., necklaces the team won or the victory over the eventual state champs.

“I didn’t know what to expect coming in as a freshman, so my goal was just to have fun with it,” Vongsaga said. “That first tournament was so memorable. Hearing that we got first, I almost fainted.”

Vongsaga is already being aggressively recruited by college programs. She is ranked 21st by the American Junior Golf Association, one of the most reputable golf organizations in the world. One that includes players up to 18 years old.

She was the first player in Diamond Bar’s program history to finish the season with a total score under par.

“She was the premiere player at every event she played in,” McCabe said. “Her overall year, she was better than any player I’ve ever had.”