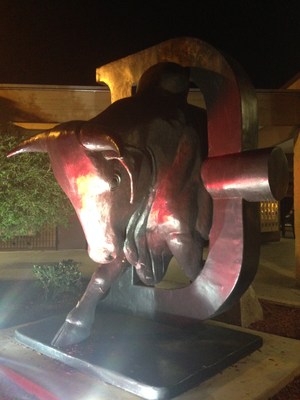 Story By Eric Hong, The Bull's Eye Opinion Editor & Photo Editor
Starting with former principal Catherine Real’s August resignation, the search for the new head of Diamond Bar High School is into its fourth month, and is projected to continue through the early months of 2016.
The district is currently repeating the process of “flying” the position, or seeking candidates for the job. The school’s search for a new principal started earlier in the year, after Real’s departure on Aug. 25, and then was closed on Oct. 1. The district reached out through various publications in the state and country but later delayed the process to find more applicants.
“We had a good, strong pool of candidates but we also had many people express an interest in the position, should it start later in the year so they could finish out their current commitment,” WVUSD Superintendent Robert Taylor said.
The district plans to meet with the school community in January, including staff members and students, to discuss what qualities in a principal they feel match the needs of DBHS, according to Taylor. After more potential candidates have been found, the district will work with the school community to assemble a vetting panel for applicants toward the beginning of the new year.
Taylor said that by delaying the process until next year, applicants interested in the position will be able to complete their current commitments for the 2015-2016 school year, allowing more candidates to be considered.
“This gives us a deeper pool of applicants to choose from, to try to get the best fit,” he said.
Taylor said that with former principal Denis R. Paul serving as the interim principal throughout the rest of the school year, the district will be able to take its time in making sure it finds the best possible candidate.
“We really like Mr. Paul being here, and we have no reason to rush him out. We want him here,” Taylor said.
Because Social Security laws put limits on the amount of income a retiree can earn, Paul will cut back on his time at DBHS next semester. Another interim principal, Guy Roubian, has been selected to share Paul’s position. Roubian, English teacher Daniel Roubian’s brother, was the auto shop teacher from 1982 when DBHS was established to 1995. He left to serve as the assistant principal of Upland High School and became the principal. Last June, Roubian retired as Assistant Superintendent of Human Resources in the Ontario-Montclair Unified School District.
Taylor anticipates that the new principal will be announced in the spring and will start the job over the summer.
http://dbbullseye.com/2015/principal-search-continues/ Source: The Bull's Eye
Print